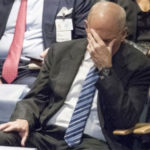 Colorado Republicans spent the weekend in Colorado Springs finalizing candidate positions for various important races in 2022. In case you haven’t heard, the GOP State Assembly did not go well. Here’s what happened…

(2) If This Weekend Surprised You, Then You Haven’t Been Paying Attention

Presumptive GOP gubernatorial frontrunner Heidi Ganahl has been flailing since her 2021 campaign kickoff about her persistent refusal to acknowledge that the 2020 election was legitimate. You can see from Saturday’s results why Ganahl has been so terrified to waffle on the “Big Lie” where the GOP base is concerned.

Republicans spent HOURS on Saturday arguing over multiple efforts from groups trying to force the Party to abandon electronic voting in favor of paper ballots. Did Republicans really think that NOBODY would bring this up at their State Assembly?

“We had to take two different votes on whether to do paper ballots,” said KBB on KNUS radio on Monday. One of the requests for paper ballots came from local militia group FEC United; KBB herself served as the President of FEC United prior to becoming State Republican Party Chair.

Again, in the “of course this happened” category.

The odds that a Republican candidate was going to lose on Saturday and then immediately claim election fraud as the reason were approximately 100%.

Danielle Neuschwanger finished in third place in the race for Governor, behind Greg Lopez and Ganahl, but short of the 30% threshold that would get her name on the June Primary ballot. Neuschwanger then publicly alleged that there were some sort of voting irregularities and that she would refuse to concede (not that anybody needs Neuschwanger to concede in order to move on to June). We know this happened because Neuschwanger posted a video of herself making this very argument:

“I’m going to make sure, if you committed any fraud, that you are behind bars,” GOP Gov candidate @DanielleforCO tells state GOP Chairwoman @ColoradoKBB in a testy exchange at the state assembly this weekend, alleging fraud by @cologop and Brown. A perfect ouroboros. #copolitics pic.twitter.com/CfCipGH51T

Near the end of the video, an unidentified man can be heard yelling, “We didn’t lose! We got screwed!”

On KNUS radio on Monday morning, KBB elaborated on this event, adding that Neuschwanger’s husband threatened to beat up her father! Totally normal stuff.

(4) Raise Your Hand if You Want to be on the Ballot!

Republicans allowed nominations from the floor on Saturday. This did not go well.

The first problem with this approach came when Oltmann was nominated for Governor (and seconded by State Rep. Pat Neville). Oltmann had no intention of accepting this nomination, but he DID use his time on stage to endorse two other Republicans: Ron Hanks for Senate and Tina Peters for Secretary of State. Both KBB and Republican Party Vice-Chair Priscilla Rahn bemoaned this on Monday on KNUS radio as a waste of everyone’s time. You’d think KBB might have had some advance knowledge of this given the fact that she basically worked for Oltmann 18 months ago.

Following the vote for Governor, two different people were then nominated from the floor for Attorney General. We wrote earlier about Stanley Thorne, but there was a second woman nominated for AG who admitted soon thereafter THAT SHE WASN’T EVEN AN ATTORNEY. Thorne, by the way, is a licensed attorney, but not in Colorado (he’s also apparently not a registered Republican).

In the end, District Attorney John Kellner escaped Colorado Springs without a Primary opponent, but he can’t be feeling too pleased with himself. As we wrote on Sunday:

Apparently 42% of Colorado Republicans said they would prefer “any random asshole” for Attorney General rather than John Kellner…EVEN if that person is not even a registered Republican in Colorado.

Saturday was unquestionably a dumpster fire for the Colorado Republican Party, but that didn’t stop KBB from attempting her own lame spin on the results:

It is true that State Treasurer candidate Lang Sias does not have a Republican opponent. As we noted earlier, AG candidate John Kellner would have had a Primary had Stanley Thorne actually been a registered Republican. In order to find a third candidate for this “no Primary”  narrative, KBB had to include some guy running for state school board.

Meanwhile, Republicans do have a primary fight for Governor, U.S. Senate, and Secretary of State. All three Republican incumbents in Congress will have a Primary in June, and both open seats (CO-07 and CO-08) have multiple-candidate Primary battles. Republicans also have NO candidates in CO-01, CO-02, or CO-06.

But, sure, YAY for Sias, Kellner, and school board guy.

In case you were wondering, Democrats have no primary battles for any statewide race. Democrats also have no Primary fight in any congressional race. The Republican spin on this is just silly.

Greg Lopez  won top line at the assembly BECAUSE he promised to pardon Peters of any crimes committed during her tenure as Mesa County Clerk and Recorder. Stanley Thorne got 42% of the vote in the race for AG because he and others claimed that John Kellner failed to support Peters with sufficient vigor.

The biggest surprise from Saturday’s assembly might be that no Republican candidate publicly proposed to marry Peters.

This is the part where we remind you that Tina Peters spent a night in jail literally one month ago. She might yet be jailed on a contempt of court charge, and we don’t even know about the federal crimes she could get dinged for in the coming months.

If there is a ray of hope for the GOP, it is that Mike O’Donnell made the June Primary ballot, giving Republicans a three-way Primary for SOS. O’Donnell is a long shot to win, but he could be helpful to the GOP if he is able to siphon votes away from Tina Peters to the benefit of Pam Anderson (who skipped the assembly after getting on the ballot via the petition route).

I think a potted plant with a Tina Peters button could’ve made the ballot yesterday. #copolitics https://t.co/x1SEvvFi6Y

Despite her endless pandering to the Republican base, presumed GOP gubernatorial frontrunner Heidi Ganahl came in second to Greg Lopez, who collected basically the same vote percentage that he received in his 2018 bid for Governor. We don’t need to tell you that it’s bad news that Ganahl is basically an afterthought following the biggest weekend of the year for Colorado Republicans.

(8) All The Momentum for Ron Hanks

Just look at this photo, via Colorado Public Radio: 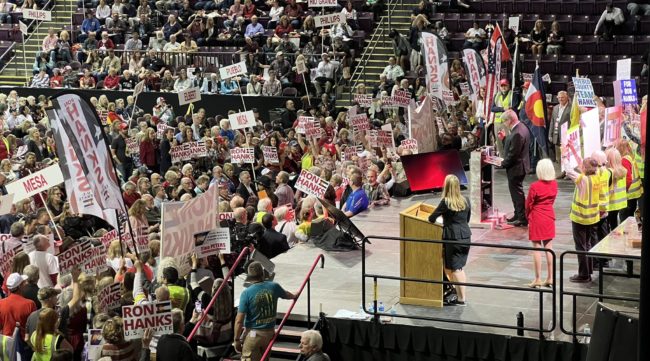 Republican operatives have insisted for months that Ron Hanks is not a real candidate for U.S. Senate and would have no chance in a GOP Primary. We’ve long believed that reality was exactly the opposite of this position.

On Saturday Hanks SHUT OUT every other Republican Senate candidate, emerging from the State Assembly as the only person to make the Primary ballot via this process (if you’re wondering how this happened, see point #2 above). Hanks will face Joe O’Dea in June after O’Dea was the only Republican Senate candidate with the sense to collect petition signatures instead of relying on the GOP’s lunatic base.

Hanks has raised very little money for his U.S. Senate campaign and is about as far away from the average Colorado voter on policy issues as a candidate could get. But he might well win the Republican Primary in June, following in the footsteps of 2016 Senate hopeful Darryl Glenn.

There is still a lot to be told on the other side of the GOP ledger. Gino Campana is a multi-millionaire former Ft. Collins City Council Member who regularly touted his connections to Donald Trump and even hired Kellyanne Conway as a consultant. He didn’t make the ballot.

Eli Bremer is a former Chair of the El Paso County Republican Party and a onetime Olympic athlete (albeit in the “modern pentathlon”) who was the first Republican candidate to enter the race in 2021. He didn’t make the ballot.

Deborah Flora is a former radio host and onetime “Miss Colorado” who entered Saturday touting the endorsement of Texas Senator Ted Cruz. She also left Broadmoor World Arena on Saturday in need of a new hobby.

Campana, Bremer, and Flora spent a lot of time and paid a lot of consultants a lot of money for a whole lot of nothing.

(9) Ken Buck, Canary in the Coal Mine

We knew things were going to be (extra) weird on Saturday after incumbent Congressman Ken Buck (R-Greeley) almost failed to get his name on the June Primary ballot during Friday’s CO-04 assembly. Buck finished in second place behind somebody named Bob Lewis. Buck will likely still win the GOP Primary, but getting just 38% of the vote from your own base is pretty sad for an incumbent Congressman.