Ron Hanks is a Monster of the GOP’s Own Creation 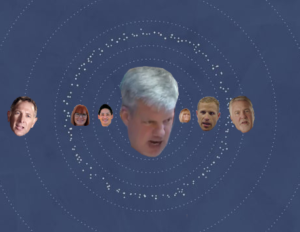 Ron Hanks is the center of gravity in the Republican Senate race.

Colorado Republicans are nervous about Ron Hanks. They should be.

Hanks, the state representative from Cañon City, has become the center of gravity in the race for the Republican nomination for U.S. Senate. That’s not good for Colorado Republicans, and many in the State GOP are well aware of the problem.

Again, they should be aware…they created this monster.

Colorado Republicans are desperately trying to refute the notion that Hanks could be the frontrunner in a GOP Senate Primary for the right to take on incumbent Democratic Sen. Michael Bennet in November. As The Colorado Sun reports today in its “Unaffiliated” newsletter, Sage Naumann, spokesman for the Colorado Senate GOP, flatly declared, “Ron Hanks won’t be the nominee.”

Naumann, who has fiercely rejected his party’s election conspiracies, called the notion [of Hanks as the frontrunner] “bullshit.”

Kyle Kohli, a former Colorado GOP spokesman who is now the executive director of the conservative nonprofit Compass Colorado, said Hanks is “a guy with no name ID and (in all likelihood) no money.”

Why it matters: The Colorado GOP is trying hard to stay on message this year about their efforts to increase affordability, decrease crime and improve Colorado’s education system. But members of the party, like Hanks and state Rep. Dave Williams, who keep spreading lies about the 2020 presidential election, shift the conversation away from those policy goals.

Here’s a screenshot of a tweet from a panicked GOP operative trying to discredit Ron Hanks’ frontrunner status.

“The Unaffiliated” goes on to report that Hanks and State Rep. Dave Williams were primarily responsible for blowing up what House Minority Leader Hugh McKean intended to be a quiet protest on Tuesday. Instead, as Alex Burness reported for The Denver Post, it became fodder for another round of terrible headlines and pointless infighting:

A majority of House Republicans also voted to “call into question” whether Joe Biden was legitimately elected; to urge the decertification of 2020 election results in an effort to reinstall former President Donald Trump; to support embattled Mesa County Clerk and Recorder Tina Peters, an ally of election deniers who is under investigation for allegedly allowing a security breach in her elections division; and to commit to ensuring dead people are removed from voter rolls — something for which there is already a process in Colorado.

Republican State Rep. Matt Soper is already voicing regret about his votes on Tuesday. As an editorial in The Aurora Sentinel concluded, Tuesday’s theatrics showed that the 2022 campaign cycle has already “unravelled into a grave and dangerous heap of far-right extremist deceit and delusion.”

The danger here is obvious when a majority of Republican elected officials in the House lavish praise on a dubious peer who says a thwarted effort to violently overthrow the U.S. government was carried out by “nice people” who “did nothing wrong.”

Yes, Colorado Republicans should absolutely be nervous about Hanks and his U.S. Senate candidacy. But they can’t act surprised, and they sure as hell can’t pretend that Hanks is some sort of rogue actor within the State GOP. The Colorado Republican Party is Dr. Frankenstein, and Hanks is a monster of their own creation.

Last weekend, Hanks easily won a “straw poll” following a Republican Senate candidate forum in El Paso County. You could perhaps argue as to whether Hanks is truly the “frontrunner” in a field of misfit, unknown candidates – we won’t know his Q4 fundraising numbers until the end of the month, for example – but there’s no debate that the current state of the GOP Senate race revolves around this one man.

Hanks ran away with the only straw poll so far taken at a primary forum, he’s the only GOP #cosen candidate to appear on national cable this month, and as demonstrated today he’s the only one making headlines outside our insider @colo_politics publication.

It’s not a mystery as to how someone like Hanks could end up at the top of the pile in a U.S. Senate Primary. The Colorado GOP has been playing footsie with Trumpers and “Big Lie” adherents ever since Election Night in 2020. The Republican frontrunner for governor, Heidi Ganahl, is so terrified of angering the Trump base that she won’t even answer straightforward questions about the legitimacy of the 2020 election.

Most of the top elected officers in the State Republican Party believe that the 2020 election was fraudulent. Those who disagree have generally refused to admit as much in public out of fear that Colorado Trumpists will turn on them. In early 2021, then-Republican Party Chair candidate Kristi Burton Brown (KBB) said flatly, “The Republican Party will never go back to the pre-Trump era.” She said this, in part, because she wanted “Big Lie” adherents to vote for her…and they did.

Did KBB know this was a bad idea for the long-term strategy for the Colorado GOP? Does it matter? What’s more important is that KBB was more than happy to trade on the “Big Lie” in order to get herself elected. Ron Hanks has every reason to be annoyed now that she’s wagging her finger at him for doing the same thing.

Ron Hanks will never be a U.S. Senator. But, yesterday’s clown show on the floor of the Colorado House and the recent straw poll results indicate he is not going away without a fight. The Colorado GOP has a serious problem on its hands.

The reason KBB won election as State Party Chair is the same reason that Soper blindly voted to “thank” insurrectionists and why Rep. Lauren “Q*Bert” Boebert has become the heart and soul of the Colorado GOP: They beat the drum of the “Big Lie” for their own personal gain. Of course the 2022 election cycle was going to include a number of election-denier adherents as official candidates – they’re just following the example of the Republican “leaders” before them.

If you keep feeding a stray cat that wanders onto your porch, you can’t reasonably be irritated when the same cat won’t go away later.