From “Always Trump” to “Maybe Not So Much Trump”

Colorado Republicans are having a heck of a time trying to figure out how to prepare for the 2022 election with the specter of 2020 and Donald Trump still looming large behind them.

Earlier this week, former Colorado Republican Party Chairman and current Congressman Ken Buck (R-Greeley) performed his signature “Buckpedal” move by diving into a new conspiracy theory about how the 2020 Presidential election was somehow rigged by Google. This was quite the turnabout for Buck, who had previously vociferously defended the handling of the 2020 election as perfectly safe and aboveboard. What changed for Buck? It’s hard to say for sure, since Buck has a history of contradicting himself, but the smart money says that Buck is worried enough about avoiding a Primary in 2022 that he feels compelled to make it clear that he can out-crazy any other potential Republican challenger.

Buck’s successor as State GOP Chair, Kristi Burton Brown (KBB), is running into this same conundrum — but in the opposite direction. Brown was elected Party Chair earlier this year in part because of her consistent defense of “The Big Lie.” Indeed, all but one of the candidates for State Party Chair regularly expressed doubts about the validity of the 2020 election results (the only one who didn’t, Jonathan Lockwood, was never a serious contender for the job). But while KBB told the GOP faithful what they wanted to hear in order to get elected Party Chair, she’s coming to realize that the job of actually winning seats in a General Election is going to require a different approach. 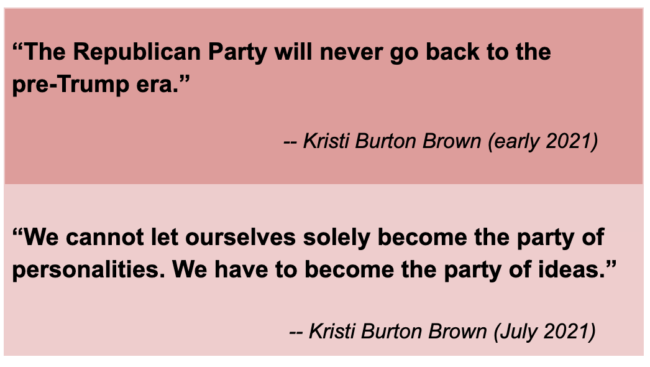 As The Colorado Sun reports in its “Unaffiliated” newsletter, KBB spoke Thursday to the Foothills Republican club and sounded a lot different than she did just a few months ago:

Burton Brown was peppered with concerns about election integrity during the question and answer portion of Thursday’s event.

“The biggest issue for me is voter cheating and this whole national election, as we all know, was a set up. I just would like to know if you know about … what was done here,” a man asked.

Burton Brown said it’s a question that she is getting “all around the state,” and that the Colorado GOP is encouraging people to “get involved” and “get your eyes in the room” by becoming poll watchers and election judges. But she said there has been no proof of mass fraud in Colorado and that the only sure way for Republicans to lose in 2022 is for the party’s voters not to show up on Election Day because they think their vote won’t count. [Pols emphasis]

(There is no proof of widespread election problems in Colorado or across the country that would have changed the outcome of the 2020 presidential election.) 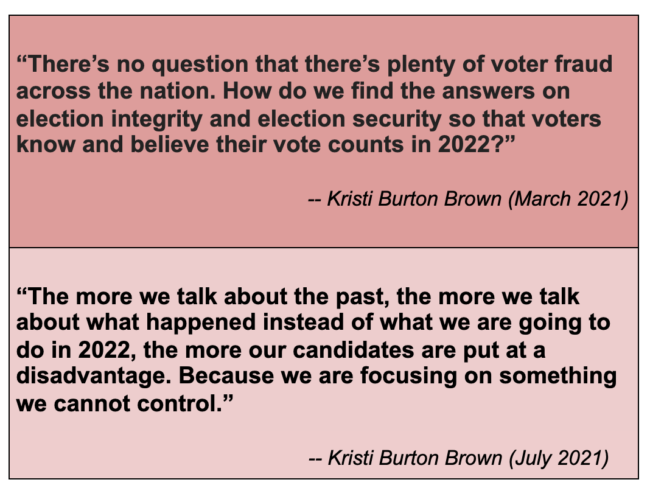 At least one-third of the 700+ Republicans who have filed to run for Congress in 2022 (U.S. House or U.S. Senate) have been very clear about their belief that the 2020 Presidential election was fraudulent. Many of these Republicans are no doubt making the same calculation that Buck is making — that they’ll worry first about winning a Republican Primary before they concern themselves with re-positioning ahead of a General Election.

Now that she’s been GOP Chair for a few months, KBB obviously sees the math differently. Her mission is to help Republicans win races in a General Election — not to concern herself with getting candidates through a Republican Primary. In order to fulfill that goal, KBB is realizing that re-litigating the 2020 election nearly two years later isn’t something that Colorado voters are going to be particularly interested in doing.

The problem for KBB, of course, is that her new message doesn’t match her old rhetoric, and the GOP faithful doesn’t seem to be all that interested in shifting gears. Trump remains the overwhelming favorite to be the 2024 Republican Presidential nominee, and there’s ZERO chance that he’s going to stop talking about the 2020 election anytime soon.

You could argue that KBB is telling Colorado Republicans what they need to hear, but Buckpedaling on her concerns about the 2020 election results won’t endear her to the Republican base in our state. This is a problem that Republicans created themselves; we’re just happy that we don’t have to try to find the solution.