UPDATE: We’d be remiss if we failed to note in this post how Rep. Ken Buck himself helped spread baseless worries about Colorado elections, asking the Department of Justice to investigate a now-deleted error-riddled CBS4 Denver story about “dead voters.”

The head of Colorado’s Republican party, Congressman Ken Buck is asking the Justice Department and the Federal Election Commission to review whether the postcards went to people ineligible to vote.

His request is based on a CBS4 Denver news story — that the station subsequently removed from its website — which incorrectly claimed the Secretary of State was using the voter rolls to send out postcards to “Non-Citizens, Dead People Urging Them To Vote.” 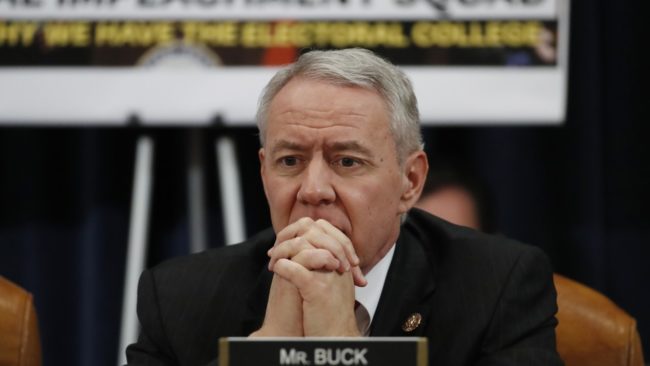 The county canvass boards that certify elections are composed of the county clerk and an equal number of members from the Democratic and Republican parties. In two counties, Jefferson and Boulder, the Republican members refused to sign certification documents, but in 36 other counties contacted by The Colorado Sun no objections were reported. A majority of the board members is required to certify the election results.

Although as we noted previously there was some baseless grumbling from a few local Republicans, echoing the similarly baseless allegations made by soon-to-be-ex President Donald Trump as Trump slowly comes to grip with his defeat, the 2020 elections in Colorado were once again for a model of administration for safe and secure mail ballot elections everywhere.

But as Colorado Public Radio’s Bente Birkeland reports, the uncontroversial conclusion of another mail ballot election in Colorado, against the backdrop of Trump’s insistence that the election was stolen via mail ballots, has landed the Colorado Republican Party in what you’d call a messaging pickle:

…Buck declined to weigh in on Trump’s unfounded criticism of the election outcomes in several states he’s tried to contest.

Despite Buck’s attempt to put distance between Colorado’s election system and whatever  is going on in those big scary ‘urban’ cities out East, last night’s conference call on the local Republican organizing platform CaucusRoom featured Republican county clerks explaining in detail how their Dominion Voting Systems hardware was tested and certified for accuracy–which directly undermines one of the biggest fantasy contentions of the lawyers suing to overturn the results of elections in swing states:

[GOP Weld County Clerk Carly] Koppes added that it’s not even technically possible for Dominion software to switch votes because the software does not designate which candidate is assigned a particular oval on the paper ballot. [Pols emphasis]

In the end, there’s simply no way to reconcile the truth about mail ballots as Colorado voters have experienced over the course of multiple major elections now with Trump’s dead-ender claims of vote fraud having robbed him of a second term. Colorado voters know from personal experience that Trump is lying about mail ballots, just as every post-election investigation and court battle has factually determined.

It will be a relief for everyone someday when local Republicans can just admit that.