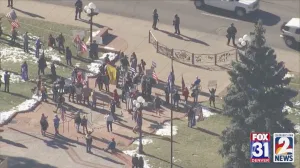 Numbers insufficient for revolution at the Colorado Capitol yesterday via SkyFOX.

About 70 demonstrators gathered Saturday near the Colorado State Capitol to protest what they alleged was fraud in the presidential election.

“We’re just trying to say that we don’t believe we’ve had a free and fair election … but what we want to do is we want other people to be aware of that, and that’s the purpose of why we’re here today,” said Matt, one of the organizers for the demonstration. He declined to give his last name.

Although polls show that a solid majority of Republicans across the country have bought into the fictional narrative of a stolen election, there appears to be a gap between the certainty expressed by the Fox News Newsmax faithful that the election was stolen when asked by pollsters and the willingness to actually come out and protest to that effect. On the weekend after the election, several hundred “protesters” more interested in openly carrying guns than protesting in the right city gathered 90 miles south in Colorado Springs. Two weekends ago, a hundred or more showed up in Denver in support of the well-short-of-a “Million MAGA March” in Washington, D.C.

Yesterday in nice weather in Denver, Trump got “about 70”–definitely headed in the opposite direction of whatever “popular uprising” Donald Trump imagines is happening right now. The more bitter and threatening Trump becomes on Twitter over the unambiguous results of the election and his self-immolating baseless legal challenges to the democratic process, the fewer MAGA diehards turn out to protest the following Saturday. At least in Denver.

“Our long national nightmare” could still end in a bang or a whimper.

But on the ground and in the courtroom, it’s looking more like the latter every day. And, well, that’s good news.