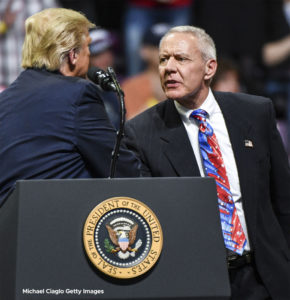 Colorado’s Rep. Ken Buck has been in a real predicament over the past few months. As a Republican who conceded that Joe Biden won the 2020 presidential election relatively quickly, and by that we still mean taking over a month, Buck has emerged as a major problem for adherents of what’s become known as the “Big Lie” that the 2020 election was stolen from Donald Trump. Buck, in his former position as chairman of the Colorado Republican Party, organized an event last December with Republican county clerks to explain to the party faithful that even though Colorado uses Dominion Voting Systems hardware and sends “unsolicited” mail ballots to all active voters, our elections are secure and accurate.

Because debunking the Big Lie here in Colorado effectively debunks it everywhere else, this has had the effect of making Buck considerably less popular with his fellow Republicans–a problem that only got worse after Buck publicly defended Rep. Liz Cheney of Wyoming while Cheney was being excommunicated for her own refusal to back the Big Lie. This was originally taking place amid speculation that Buck might retire from Congress, but in April Buck announced that he would run again for re-election in 2022.

Which leads to the next logical question: how does Ken Buck intend to stave off a pro-Trump primary challenge? Today, courtesy Lauren Windsor of the Undercurrent, we got the answer:

…Btw, Buck is the ranking member on the committee leading the antitrust fight on Big Tech 😬 pic.twitter.com/oBzCDm39oX

As you can see in the clip above, Ken Buck now says the 2020 election was “stolen”–not by rigging the actual votes, but because Google supposedly changed their search algorithms to “disadvantage” Donald Trump and advantage Joe Biden. Buck asserts that fully 15 million votes for Trump were “moved” to Biden due to this action by Google, though probably not members of his audience since they “Google in a more sophisticated way.” Under questioning Buck admits that the 15 million number is speculative, but he insists that the downranking of conservative media outlets in search results was all by itself enough to flip the 2020 elections. And since Americans are “so upset with boys playing girl sports, Critical Race Theory, and all the other things that are going on,” Buck says, Republicans will win back the House in 2022 and immediately hold hearings to prevent “the algorithms” from happening again in 2024.

And with that, yes, Buck probably avoids a MAGA primary. Democrats who found themselves in the odd position of praising Ken Buck for his honesty immediately after the election can stop now, because Buck has given the faithful a replacement conspiracy theory for the thoroughly debunked Big Lie that can truly live on forever. This was never about trust-busting for Buck, but an ideological quest to force internet companies to abandon their high-profile struggle against the spread of dangerous misinformation–which (there’s no nice way to say this) fully explains any downranking of right-wing “news” sites in search results by Google.

In the end, Buck came crawling back to Trump–like the whole Republican Party has.