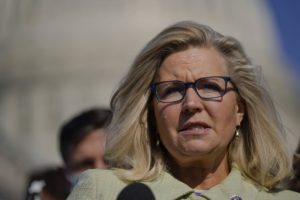 As the fully-expected ouster of Rep. Liz Cheney from her leadership position in the Republican U.S. House minority leadership proceeded as planned this morning, one fellow Republican member of Congress, Rep. Ken Buck of Colorado, emerged as one of Cheney’s most visible defenders–leaving fellow Republicans fuming as Buck also publicly refuses to embrace Donald Trump’s “Big Lie” that the 2020 election was stolen. Forbes:

Lawmakers who were in the room said the vote was decisively against Cheney, with Rep. Ken Buck (R-Colo.) estimating “probably three-quarters” voted to remove her and “one quarter” voted to retain her.

Rep. Lauren Boebert, Cheney’s metaphorical head in hand, says it’s Year Zero for the Republican Party. It was just last year that they appeared jointly at a Denver fundraiser:

Liz Cheney is the GOP of the past. We are not going back. 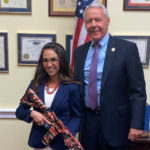 But as The Guardian reports, Ken Buck was vocally not happy about Cheney’s fate:

Congressman Ken Buck, a member of the conservative Freedom Caucus in the House, described Liz Cheney as a victim of “cancel culture”.

“Liz Cheney was canceled today for speaking her mind and disagreeing with the narrative that President Trump has put forth,” Buck told reporters shortly after the vote to remove Cheney as conference chair. [Pols emphasis]

Buck was one of Cheney’s few defenders in the House Republican caucus going into the vote, and he was the only Republican lawmaker present for Cheney’s defiant floor speech last night, according to CNN.

As for Cheney’s replacement, Rep. Elise Stefanik of New York?

“Liz Cheney was canceled today for speaking her mind.”

Asked about Elise Stefanik: “I think she’s a liberal.”

Buck says he does not support Stefanik, the Republican congresswoman from NY.#copolitics

On the underlying issue pertinent to Cheney’s ouster today from her House leadership position, which is the results of the 2020 presidential election, Ken Buck surprised everyone by attempting at substantial political peril to dispel the prevalent myths about the 2020 elections here in Colorado–and by doing so, refuting the case Trump himself was making to his supporters in the buildup to the January 6th insurrection at the U.S. Capitol.

Like Liz Cheney herself, Ken Buck’s conservative credentials on the issues are unassailable, and in Buck’s career in office he has outraged Democrats with far more regularly than he ever stood with them. Defending Liz Cheney isn’t about partisan politics, but rather an obligation to the truth that Buck, unlike the vast majority of Republicans today, honors above any one man.

Which means Boebert, Matt Gaetz and his “America First” tour, and the “election truther” who succeeded Buck as Colorado GOP chair will be coming for Buck next.

When Boebert scoffs at the “GOP of the past,” how is she not talking about Ken Buck too?