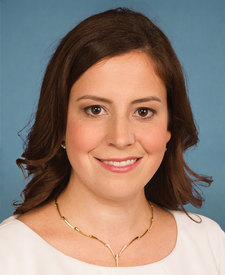 The Phil Anschutz-owned Washington Examiner treats us to a feature-length interview with Rep. Elise Stefanik of New York, who as readers know is set to become the next U.S. House GOP conference chair as the star of Rep. Liz Cheney of Wyoming continues to fall:

“I disagree that it’s binary between looking back and looking forward,” the New York congresswoman told the Washington Examiner on Monday as she campaigned to supplant Rep. Liz Cheney of Wyoming as the No. 3 ranking House Republican. Cheney is expected to be voted out of leadership on Wednesday over her dogged refusal to stop scolding former President Donald Trump for insisting the November election was stolen and that President Joe Biden is illegitimate…

Washington Examiner: Do you agree with Trump that Biden was illegitimately elected and the election was stolen?

Stefanik: President Biden is president, and the focus is on defeating his radical agenda, which I believe we will do in 2024. And we’re going to win the midterms in 2022. I have said that there are election irregularities and an unconstitutional overreach, which is why I objected to certain states. You can refer to my statement on the House floor. I fully stand by that, and voters support the focus on those issues. But the irregularity, the unconstitutional overreach, the lack of ballot security, those are important issues that the American people want to hear solutions from the Republicans on.

Liz Cheney’s impending ouster due to her unwillingness to participate in the “Big Lie” that ex-President Donald Trump was cheated out of a second term in the 2020 presidential elections is a defining moment for the Republican Party, a final rejection of the opportunity afforded by the chaos of the past year to turn the page away from Trump’s cult of personality. This conflict has nothing to do whatsoever with Republican policy goals, which Cheney is firmly aligned with. This is purely about fealty to Trump, and willingness to maintain a false pretense that a majority of Americans have dismissed in order to keep Trump’s 2024 comeback hopes alive.

Axing Rep. Cheney in favor of “election truther” Rep. Stefanik is overall a positive development for Colorado’s Rep. Lauren Boebert, who is facing an ethics investigation requested by Rep. Pramila Jayapal over Boebert’s own role in inciting the January 6th insurrection at the U.S. Capitol. But there’s a twist: Stefanik appears to go quite a bit farther in allowing for the possibility of election fraud than Boebert did in her response to Payapal’s ethics complaint, in which Boebert asserts she wasn’t alleging “election fraud” at all:

The general allegations are that I was involved “ in instigating and aiding the violent riot at the Capitol Building on January 6, 2021” and that I “endangered fellow Members’ lives and pursued a disinformation campaign related to the election results that resulted in an armed uprising.” To be clear, I was not involved in instigating and aiding the riots that took place on January 6th at the U.S. Capitol and there is no evidence that would support further investigation of these unjustified, politically motivated claims. As previously mentioned, my objections to the counting of Electoral College votes in Arizona and Pennsylvania were based on the Constitution and changes to state law that were not made by the state legislature, not election fraud. [Pols emphasis]

Which is, of course, ridiculous: 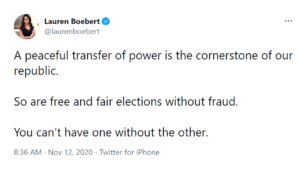 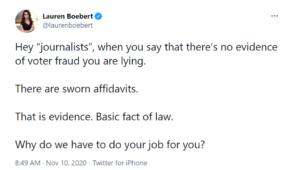 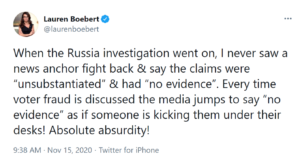 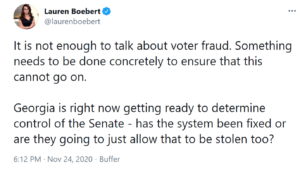 On the one hand, the more senior figures in GOP leadership who were willing agents in the leadup to January 6th’s violence, the less likely accountability is to reach Boebert’s level as a freshman GOP representative. For the whole party to be on the same seditious page makes it safer for everyone from Stefanik to Colorado’s own Danny Moore to “just ask questions.” On the other hand, Boebert’s defense in the Jayapal complaint relies on a pretense that nobody at this point should take seriously.

Either way, the man who cost the GOP everything wins again.