The Big Lie is Still the Only Truth for Republicans 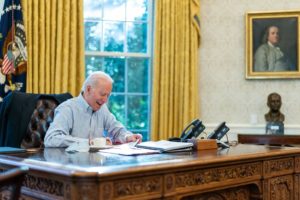 Not Donald Trump at work in The Oval Office.

It has been 216 days since the last Presidential election…unless you are a Republican candidate for public office in 2022. Republican politicians exist in an alternate reality from everyone else; they can’t discuss the future because they’re still obsessed with re-writing the past. For them, the Big Lie is still the only truth that matters.

As The New York Times explains:

Across the country, a rising class of Republican challengers has embraced the fiction that the 2020 election was illegitimate, marred by fraud and inconsistencies. Aggressively pushing Mr. Trump’s baseless claims that he was robbed of re-election, these candidates represent the next generation of aspiring G.O.P. leaders, who would bring to Congress the real possibility that the party’s assault on the legitimacy of elections, a bedrock principle of American democracy, could continue through the 2024 contests.

Dozens of Republican candidates have sown doubts about the election as they seek to join the ranks of the 147 Republicans in Congress who voted against certifying President Biden’s victory. There are degrees of denial: Some bluntly declare they must repair a rigged system that produced a flawed result, while others speak in the language of “election integrity,” promoting Republican re-examinations of the vote counts in Arizona and Georgia and backing new voting restrictions introduced by Republicans in battleground states.

They are united by a near-universal reluctance to state outright that Mr. Biden is the legitimately elected leader of the country…

…But Republicans’ unwavering fealty to the voter fraud myth underscores an emerging dynamic of party politics: To build a campaign in the modern G.O.P., most candidates must embrace — or at least not openly deny — conspiracy theories and election lies, and they must commit to a mission of imposing greater voting restrictions and making it easier to challenge or even overturn an election’s results. The prevalence of such candidates in the nascent stages of the party primaries highlights how Mr. Trump’s willingness to embrace far-flung falsehoods has elevated fringe ideas to the mainstream of his party. [Pols emphasis]

Multiple news outlets — including the Times — reported last week that former President Trump remains completely consumed by the idea that the 2020 election was somehow stolen from him. These aren’t just the bitter ramblings of a fragile ego; Trump actually believes that he is going to end up back in the White House within a matter of months. As Charles Cooke of the conservative National Journal writes:

I can attest, from speaking to an array of different sources, that Donald Trump does indeed believe quite genuinely that he — along with former senators David Perdue and Martha McSally — will be “reinstated” to office this summer after “audits” of the 2020 elections in Arizona, Georgia, and a handful of other states have been completed. [Pols emphasis] I can attest, too, that Trump is trying hard to recruit journalists, politicians, and other influential figures to promulgate this belief — not as a fundraising tool or an infantile bit of trolling or a trial balloon, but as a fact…

…The scale of Trump’s delusion is quite startling. This is not merely an eccentric interpretation of the facts or an interesting foible, nor is it an irrelevant example of anguished post-presidency chatter. It is a rejection of reality, a rejection of law, and, ultimately, a rejection of the entire system of American government. 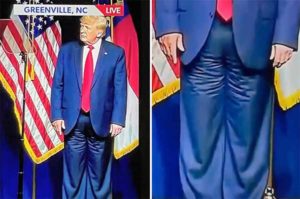 As Cooke continues, even if there were irrefutable proof that the 2020 election was rigged against Trump, there is absolutely nothing that can change the fact that Joe Biden is the current President of the United States.

None of this apparently matters to many Republicans, who continue to insist that their ideal 2022 candidates look and act like Trump. This is a real problem for the GOP, because the majority of Americans prefer to see 2022 candidates who are as ideologically different from Trump as possible. This devotion to The Big Lie also prevents Republicans from even pondering their next steps. As The Associated Press reports:

Republicans are fighting to seize control of Congress. Just don’t ask what they’d do if they win.

Look no further for evidence of the GOP’s muddled governing agenda than battleground North Carolina, where party leaders packed into a convention hall Saturday night to cheer former President Donald Trump. Even with a high-stakes U.S. Senate election looming, the Republicans there were united not by any consistent set of conservative policies or principles, but by Trump’s groundless grievances about the 2020 election and his attacks against critics in both parties…

How do Republicans in Colorado move forward in 2022 when they are so chained to 2020? How can someone like Heidi Ganahl seek the GOP nomination for Governor when she risks losing the support of her base just by answering the question, “Is Joe Biden the President?”

Insisting that Biden is not really the President might still work for the likes of Rep. Lauren “Q*Bert” Boebert (R-ifle) or Doug Lamborn (R-Colorado Springs), but it’s not going to win much support outside of deep-red districts. Colorado will gain an eighth Congressional seat in 2022; it’s likely that the winner of an eventual GOP Primary will be someone who declares that 2020 never happened. Good luck explaining that in a General Election.

There’s an old saying about how those who fail to learn from the past are condemned to repeat the same mistakes in the future. This still applies even if you pretend the past never happened.