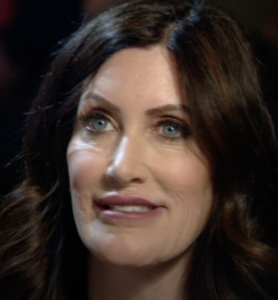 Heidi Ganahl prepares to (not) answer a question from a reporter.

The office of Governor was an open seat in 2018, which prompted several candidates on both sides of the political aisle to take a shot at the top job in the state. After a fairly anticlimactic Primary Election — on both sides — Democrat Jared Polis went on to defeat listless Republican Walker Stapleton by an 11 point margin in November 2018.

Republicans were hoping for a better outcome in 2020 with incumbent Sen. Cory Gardner; but after an uninspiring re-election campaign, Gardner was trounced by Democrat John Hickenlooper (53-44) in a race that never even seemed to be that close. Gardner’s loss left the Republican Party with one — one! — remaining statewide elected official in Colorado, University of Colorado Regent Heidi Ganahl.

With a depleted bench of potential candidates small enough to fit inside a phone booth, Republicans had few options as they looked ahead to 2022…so they turned to the “last Republican standing” in an effort to break their string of recent top-of-ticket failures. But barring some sort of miracle in the months ahead, Ganahl is destined for an electoral disaster of Stapleton/Gardner proportions.

Ganahl expressed early interest in running for Governor and set out on a statewide “podcast tour” that was clearly designed to raise her profile in advance of an official campaign launch. Ganahl and her advisers eventually ditched the podcast nonsense and kicked off a formal campaign for governor in September that demonstrated less potential than a backup quarterback for the Denver Broncos.

Ganahl’s campaign launch began with a bungled effort at generating suspense in advance of a formal announcement in an ominous location. Once things got going, Ganahl proved completely unprepared to answer even basic questions from reporters and struggled to elaborate on a nonexistent platform of ideas. Ganahl’s campaign ended up cutting its 2-week statewide tour in half when it became clear that nobody, anywhere, wanted to listen to her speak.

Day 2 of @heidiganahl’s #COGov campaign and it’s off to a strong start. One day she might even have an event attended by a double-digit number of supporters. pic.twitter.com/Y9IVoYpGfu

Ganahl’s gubernatorial kickoff was legitimately one of the saddest efforts we’ve seen in recent Colorado political history. Before the month was out, multiple REPUBLICAN political experts were publicly acknowledging that her campaign would have to improve just to reach “dumpster fire” status.

And then things GOT WORSE. 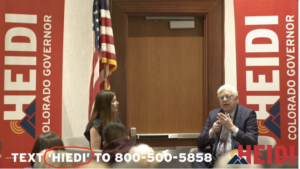 In early October, Ganahl hosted a speaking event featuring right-wing nutjob Dennis Prager in which she and her guest both chuckled at the idea that Prager was legitimately TRYING to get infected with COVID-19 (making the entire thing even more ridiculous, listeners who could not attend the event in person were asked to text questions to “HIEDI,” which is not how Ganahl actually spells her first name). A few days later, Prager indeed tested positive for COVID-19, which resulted in Ganahl getting media coverage for hosting a superspreader event.

Ganahl dumped her campaign manager after one month on the job, right around the time that her campaign was reporting a brutal batch of initial fundraising numbers; were it not for a $50,000 loan from the candidate herself, Ganahl’s campaign would have finished Q3 with a measly five figures in the bank.

As we enter 2022, Ganahl has been alternating between trying to appeal to fringe right-wing militia groups and almost gleefully spreading news reports of violent criminal acts in Colorado. It is no exaggeration to say that Ganahl is running the worst gubernatorial campaign in the entire country.

Clear-headed Colorado Republicans might not have truly believed that they could defeat Polis in 2022, but down-ballot candidates were surely hoping to ride the coattails of their gubernatorial nominee for a few extra votes next fall. The fact that Ganahl is as good as it gets for the GOP tells you everything you need to know about the current state of the Colorado Republican Party.