Eli Bremer for Senate, Or Whatever 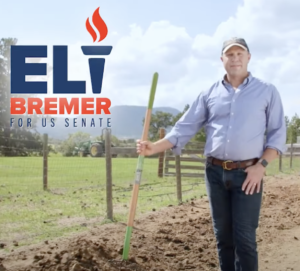 Eli Bremer and some dirt

We finally have a notable Republican campaign announcement for 2022 (sorry, Erik Aadland)!

Former El Paso County Republican Party Chairperson Eli Bremer made it official today with a rather silly online ad that he will seek the Republican nomination for U.S. Senate in 2022.

The 43-year-old Republican competed in the modern pentathlon at the 2008 Olympics in Beijing and has worked as an Olympics announcer for NBC since, including during this year’s Games. He also serves on a congressional committee that is studying possible reforms to the U.S. Olympic system.

Bremer has never run for public office but was the El Paso County GOP chairman from 2011-2013 and his family has deep ties to Colorado Springs politics. His father was a county commissioner and his wife currently is. His uncle, Paul Bremer, was a presidential envoy to Iraq in the 2000s.

This is the point where you think to yourself, Oh, THAT’S why I recognize the name ‘Bremer.’ If you have a particularly good memory for Colorado politics, you might also recall that Eli’s father, Duncan Bremer, was one of the six Republican candidates who ran for a vacant seat in Congress in CO-05 in 2006 (that GOP Primary was ultimately won by current Rep. Doug Lamborn). Bremer’s wife, Cami Bremer, is also a first-term commissioner in El Paso County.

Eli Bremer’s most recent political experience included a two year stint as Chair of the El Paso County Republican Party. In 2020, Bremer was involved in a spat with then-State Party Chairman Ken Buck about a district assembly that may have unfairly excluded at least one Republican candidate and might have opened up Buck to charges of perjury.

Bremer competed in the modern pentathlon in the 2008 Olympics, which [checks Wikipedia] involves running, swimming, jumping a horse, shooting a pistol, and fencing (presumably not all at once). Bremer has since done Olympic television commentary for the modern pentathlon, which resulted in this completely bizarre Facebook post from last week about Bremer taking a cautious approach to a story about a coach who may have punched a horse (there’s NO WAY we could make this up). 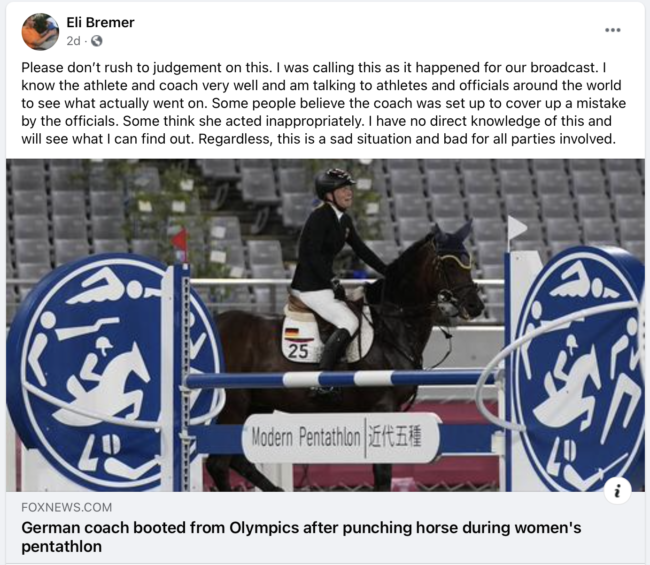 Bremer has long expressed interest in the 2022 Senate race, telling Ernest Luning of the publication formerly known as the Colorado Statesman in June that he was “very, very, very, very serious” about the idea. Bremer is now the most prominent Republican candidate for U.S. Senate mostly because nobody else in the GOP has been even “very” interested in challenging incumbent Democratic Sen. Michael Bennet.

With former state lawmaker Clarice Navarro apparently backing away from making a Senate run in 2022, that leaves the Republicans with only right-wing radio host/ambulance chasing lawyer Dan Caplis as a potential candidate with an ability to gather any sort of serious resources for a 2022 campaign.

In other words, Eli Bremer is probably the frontrunner for the GOP Senate nomination. That’s good news if your name is Michael Bennet, but less exciting if you are a Colorado Republican.