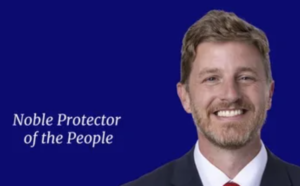 We did not Photoshop this image. This is really what it says on his website.

As Ernest Luning reports for the publication formerly known as the Colorado Statesman, Republicans at last have a candidate for U.S. Senate to challenge incumbent Sen. Michael Bennet (D-Denver) in 2022.

Although (or should we say, Aaaand…) they might want to keep looking for other options.

As Luning explains, some dude named Erik Aadland, who literally just became a registered Republican voter in Colorado a few weeks ago (March 1, 2021, to be exact), is ready to take on Bennet after being trained in the ways of politics by — wait for it — Casper Stockham:

“I found America First because I was following Casper on Twitter leading up the 2020 elections and then was somewhat devastated by what transpired in the elections,” Aadland said Monday in an appearance with Stockham on the conservative PJNET Live video podcast.

“I just felt divinely inspired to show up there. Very quickly, he planted a seed that I should run for office,” Aadland said, referring to Stockham, who ran unsuccessfully against U.S. Rep. Ed Perlmutter last year and lost a bid for state Republican Party chairman in April…

…”I think I’m called by God and it’s been a series of synchronicities and meeting the right people and not making this decision on my own,” he said. [Pols emphasis]

[Side Note: Stockham also tried unsuccessfully to run for Congress in CO-01 and CO-06 in recent years, so maybe he’s not the best political mentor.]

Aadland is a West Point graduate who served combat tours in Iraq and Afghanistan and currently lives in Pine, Colorado. According to a bio on his website, Aadland worked in the oil and gas industry until recently. In 2020, he apparently earned a Master’s degree from Pacifica Graduate Institute in Depth Psychology…whatever that means.

And why, you may ask, does Aadland want to run for U.S. Senate? (aside from the fact that there might not be a robust job market in the field of “Depth Psychology”) As Luning reports, Aadland had this to say to the Jefferson County Republican Men’s Club in Wheat Ridge:

“This country is on the brink of being taken over by a communist government and perpetuating their communist agenda. We need to open up our eyes and be very aware of that. That’s what’s happening,” he said.

“The 2020 election, it was rigged. Absolutely rigged.”

In a normal timeline, this might be disqualifying. But as we wrote earlier this week, Republican candidates for federal office — across the country — believe that speaking up about “The Big Lie” is essentially a requirement if you want to win a Republican Primary in 2022. Heck, 3 in 10 Republicans still believe that Donald Trump is going to magically be reinstated as President in a couple of months.

It’s still hard to imagine that this guy could actually win the Republican Senate nomination in 2022, but stranger things have happened to Sen. Bennet. Like Darryl Glenn, for example.