Of Course Andy Biggs is the Colorado GOP’s Keynote Speaker 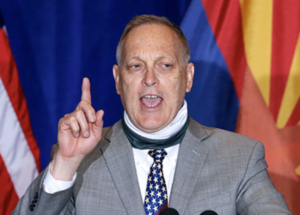 When Colorado Republicans gather for the GOP’s annual big fundraising event on Friday, called “The 2022 Centennial Dinner,” they will have the opportunity to eat, drink, and enjoy the political musings of right-wing Congressman Andy Biggs of Arizona.

“Congressman Biggs is a respected conservative and someone who is fighting every day to stop the failed Biden agenda pushed by Michael Bennet and Jared Polis,” State Republican Party Chair Kristi Burton Brown said in a statement, referencing Colorado’s Democratic U.S. senator and governor, respectively, who are up for election this year…

…One of former President Donald Trump’s most vocal supporters in Congress, Biggs has been among the leading promoters of unsubstantiated contentions that the 2020 presidential election was stolen from Trump. Last fall, following completion of a controversial, partisan election review conducted in Arizona’s largest county, Biggs said in a congressional hearing that no one knows whether Trump or President Joe Biden carried the state, despite the audit’s conclusion that Biden won Arizona.

Including “Andy Biggs” and “respected conservative” in the same sentence is sort of like making a peanut butter sandwich with mustard, but, whatever.

What will Biggs tell his audience of Colorado Republicans? As Luning reports in a subsquent Tweet, that’s a mystery:

It’s possible @RepAndyBiggsAZ will explain to @cologop donors how a privately owned company exercising its 1st Amendment rights amounts to Soviet-style communism, when he delivers keynote speech at Friday’s Centennial Dinner, but it’s closed to the press, so we’ll never know. https://t.co/vLkySENyQd

The Arizona Republic recently declared Biggs and fellow Republican Congressman Paul Gosar as “the proud Putin wing of Arizona’s GOP.” Biggs and Gosar were among just a handful of Republicans — a list that includes Colorado Rep. Lauren “Q*Bert” Boebert — to vote AGAINST a bill banning the import of oil and gas from Russia. Biggs and Boebert also opposed recent legislation to suspend normal trade relations with Russia.

Biggs has been closely tied to the “Stop the Steal” rallies that proceeded the storming of the U.S. Capitol on Jan. 6, 2021; he has publicly suggested that the insurrection was really the work of Antifa. Inviting Biggs as the keynote speaker at their biggest night of the year is a weird choice for Republicans who have otherwise been trying to avoid talking about the “Big Lie” in 2022.

Actually, the more we think about it, the less odd it seems that Colorado Republicans are putting Andy Biggs at the top of their program. Remember back in March 2020 when Rep. Ken Buck (R-Greeley) was one of just two Republicans to vote AGAINST the first big COVID-19 relief bill? Guess who cast the other ‘NO’ vote?

Will it be any real surprise, then, if State Rep. Ron Hanks makes it onto the June Primary ballot for U.S. Senate one day later when Republicans meet for their state assembly? Hanks is YUGE proponent of the “Big Lie” and even uses homemade insurrection footage in his campaign ads. He’s exactly the kind of candidate that someone like Biggs would endorse.

It will be interesting to see if any of the top 2022 Republican candidates in Colorado try to avoid being seen with Biggs. Ducking the annual “Centennial Dinner” will be more difficult than skipping out last summer when the El Paso County Republican Party invited Georgia Rep. Marjorie Taylor Greene to keynote their big fundraising event.