MTG In El Paso County Going Over Like A Lead Zeppelin 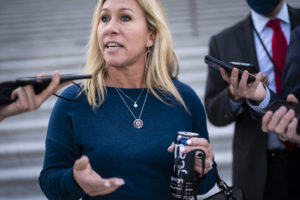 Faith Miller at Colorado Newsline follows up on a story that’s been developing out of conservative El Paso County for several weeks now–an upcoming appearance by infamous outrage-courting “QAnon” conspiracy theorist and freshman GOP Georgia congresswoman sans committee Marjorie Taylor Greene to be the keynote speaker at the El Paso County Republican Party’s “Lincoln Day Dinner,” which it could be argued should have Abraham Lincoln turning over in his grave:

Who shows up, and who doesn’t, could indicate the willingness of prominent Colorado Republicans to embrace the far right. But local elected officials generally appear to be avoiding that conversation…

One of the more important fundraising opportunities for county-level Republican Party organizations, the El Paso County Lincoln Day Dinner is already facing some controversy with the chair of the party Vickie Tonkins in a state of ongoing conflict with a large faction of…not moderate so much, but somewhat less unhinged than Tonkins and the FEC United quasi-militia fringe element that has supported her despite longstanding allegations of mismanagement. Inviting Congress’ biggest freshman Republican embarrassment (sorry, Lauren Boebert) to keynote the party’s annual fundraiser puts the El Paso County party faithful in an even more difficult position:

Four officials, including Republican County Commissioner Holly Williams, said they would not attend the dinner.

“[MTG] is not a speaker I am interested in hearing,” Williams said via text when asked her opinion on Greene.

State Sen. Bob Gardner, a Colorado Springs Republican, told Newsline he wouldn’t have attended regardless of the speaker. “I’m focusing all of my efforts, all of my fundraising and advocacy on taking the state Senate back (from Democrats),” Gardner said.

“I honestly will tell you, the decision doesn’t have anything to do with the invitation of Taylor Greene to the Lincoln Day dinner,” he added, declining to comment on the choice of speaker.

In addition to Sen. Bob Gardner, who when he says he is “honestly” telling you something almost certainly is not, at least two other local lawmakers say they’ll be traveling or otherwise committed on the day MTG comes to town. Again, whether it’s displeasure over inviting MTG in particular or with the state of the El Paso County GOP in general motivating some Republicans to stay home from the party’s big fundraiser, it’s still not a good development.

And then there’s the much larger contingent of El Paso County Republicans who don’t want to talk at all:

Needless to say, that’s a whole lot of Republicans who either don’t want to get muddied up in this controversy or haven’t decided whether their loyalties lie. For example, El Paso County Commissioner Cami Bremer’s husband Eli Bremer, a possible Republican candidate to oppose Sen. Michael Bennet in 2022, does not want to appear in a photo with MTG–but there are consequences whether he shows up or not in a GOP primary.

At a moment when Colorado Republicans need more than ever to unite, MTG is helping them stay divided.

Those who say she’s a Democratic asset in the long run may have a point.