WEDNESDAY UPDATE: The Colorado Springs Gazette’s Ernest Luning usefully updates this story, and though it appears that the United American Defense Force militia group will not be providing security at this weekend’s El Paso County GOP central committee meeting as previously reported, the state of play is still quite confusing:

El Paso County Republicans have been sounding the alarm over plans by the party’s embattled chair to engage a group of armed volunteers to provide security at the county GOP’s meeting Saturday, when hundreds of Republicans are expected to gather at a Colorado Springs church to elect party officers.

The head of the United American Defense Force, however, said Tuesday that El Paso County GOP chair Vickie Tonkins had no business saying the group would be involved with the political party and could have exposed his organization to legal jeopardy.

Luning’s in-depth story does appear to confirm that the embattled current county chair Vickie Tonkins is plotting with the far-right organizing group FEC United to fill lower ranking leadership positions in the county party organization with election-denier loyalists, but–and this is probably good, we guess–it doesn’t look like anyone actually asked the militia wing of FEC United to send “security” to the central committee meeting. Or the militia boys said no when they were asked, or maybe reconsidered after the press started sniffing.

We have no reason to expect truthful explanations from anyone involved.

But if it means El Paso County Republicans can do their business Saturday without fear of being shot, take the win. 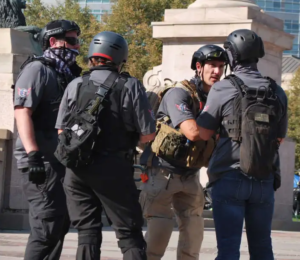 Representing the state’s biggest bastion of conservative political power, the El Paso County Republican Party has seen its share of red-on-red intraparty conflict over the years as the party’s competing corporate and freakshow wings jostle for control. But as the Colorado Springs Independent’s Heidi Beedle reports, the party’s most recent turn to the hard right in the aftermath of the 2020 elections is taking on some…disconcerting attributes:

According to documents obtained by the Indy, the El Paso County Republicans will be using United American Defense Force (UADF), the armed wing of conservative political group FEC United, as security for its Feb. 6 Central Committee Meeting. During the Central Committee Meeting, county and district leaders will be elected by Republican Party members. According to a document provided to the Indy titled, “UPDATED Tentative – Agenda Saturday, February 6, 2021,” the sergeant-at-arms for the meeting is listed as “UADF Security.”

FEC United, a right-wing political organizing group founded by local conspiracy theorist Joe Oltmann, surged to prominence last year during the protests against public health measures to slow the spread of the COVID-19 pandemic. This organizing set the stage for the group’s leading role in “Stop the Steal” protests in Denver–and elsewhere, in order to avoid Denver’s prohibition against openly carrying firearms. But what makes FEC United different from so many other conservative political groups is their Sinn Fein-style alliance with an armed militia group known as the United American Defense Force (UADF).

And it looks like FEC United is on a mission to purge the El Paso County Republican Party of the insufficiently faithful, thus resolving an increasingly bitter dispute between the party’s leaders and members:

On Jan. 24, the El Paso County Republicans hosted FEC United members at its party headquarters on Centennial Boulevard. When the Indy arrived, a greeter asked, “Here for FEC?” Shortly after, the Indy was asked to leave the meeting. A Facebook post from FEC United about the event read “Pikes Peak FEC United! The El Paso County GOP bi-annual Committee meeting occurs February 6th. In that meeting we have the opportunity to vote out the corrupt RINOs, install anti-corruption / pro-Constitution leadership, and retain Vickie Tonkins and John Pitchford who have led the charge for the past 2 years in the El Paso County GOP! We need you to volunteer to be one of the leaders who can vote in the El Paso County GOP Committee Meeting by becoming a precinct leader, division leader, or House District leader.… A small requirement to help us clean up the local Republican Party and help preserve the Republic! If you’re interested in becoming a precinct leader, contact John Pitchford.”

The tension between the chair and treasurer of the El Paso County GOP and its active members reportedly goes back to last summer, when chair Vickie Tonkins was layered with punitive approval processes and Treasurer John Pitchford was removed and later re-instated. The alliance with FEC United does not appear to be welcomed by most current members either–hence the plot to “vote out the corrupt RINOs” from lower leadership positions at this coming Saturday’s central committee meeting.

Which will now have “security” provided by FEC United’s armed militia group.

All we can say is, if you’re hoping this is an aberration and not the future of Republican politics, you’re not alone. There’s a very good reason we don’t do armed political movements in America, and we got the most sobering reminder possible short of full scale war on January 6th.

Let’s not go down this road, okay? Not even in El Paso County.