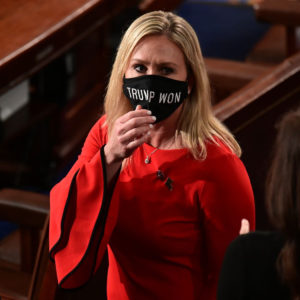 Ernest Luning of the Colorado Springs Gazette’s political blog reports that the El Paso County Republican Party, controlled by a hard-right faction of local party activists led by controversial party chair Vickie Tonkins and backed up by the literal muscle of the FEC United/United American Defense Force militia group, has invited to Colorado the one member of Congress who could be considered an even greater embarrassment than Colorado’s Rep. Lauren Boebert:

The El Paso County Republican Party has booked U.S. Rep. Marjorie Taylor Greene, the Georgia Republican who was stripped of her committee assignments earlier this year, to deliver the keynote speech at the party’s annual Lincoln Day dinner.

Props to Luning for a two-paragraph summary of just how crazy Rep. Marjorie Taylor Greene really is, which should be required to follow every press mention of Greene’s name:

Greene, a staunch ally of former President Donald Trump, has sparked a near-constant stream of outrage since her election last year and in February was removed from her committee posts in an overwhelmingly party-line vote after social media posts calling for the execution of Democratic leaders, including House Speaker Nancy Pelosi, came to light.

She’s also declared that the 2018 school shooting in Parkland, Fla., was a “false flag” operation meant to scare Americans into supporting gun control, and in 2018 suggested that a devastating California wild fire was started by space lasers controlled by a powerful Jewish family.

MTG’s most recent offense of comparing mask mandates to the experience of Jews during the Holocaust resulted in an extremely rare apology, but that came only after Republican House leadership and Jewish groups across the country spoke out in condemnation of MTG’s remarks. There’s little evidence that her apology was taken seriously, and having lost her committee assignments in a bipartisan vote after unsuccessfully trying to sort-of atone for her past misdeeds in February, MTG’s only job now is to delay and disrupt and demagogue from the sidelines.

Obviously, it’s a sign of how far to the fringe the El Paso County GOP has lurched in recent years to see them reward the very worst behavior from any Republican elected official in 2021 with their keynote address. You don’t do this by accident. The message is unmistakable. The only question now is whether the Colorado Republican political establishment, which includes influential Jewish Republican donors like Larry Mizel, will tolerate the slap in the face this represents.

If they do, a new bottom will then be sounded.