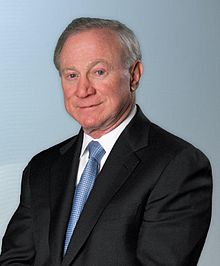 With Republican presidential nominee Donald Trump’s next fundraiser in Colorado set for August 25th in Aspen, we just wanted to note again for the record who Trump’s go-to guy for fundraising in our state is once again, not matter what controversy Trump steps in–as the Denver Business Journal reports:

Larry Mizel, CEO of Denver-based homebuilder [M.D.C. Holdings], will host a fundraiser for Donald Trump and the Republican Party at a home in Aspen…

Mizel — a longtime supporter of Republican causes — is co-chair of Republican presidential candidate Trump’s Colorado campaign. He founded M.D.C. Holdings (NYSE: MDC) — which does business as Richmond American Homes — in 1972.

As we’ve noted previously, local Republican kingmaker Larry Mizel has a very long history of philanthropy in addition to his support for Republican candidates and causes. Mizel is among other things the founder of the Simon Wiesenthal Center, a leading international Jewish human rights organization. The Wiesenthal Center has condemned the rhetoric used by Donald Trump on the presidential campaign trail, saying his attacks on Muslims “hurts the legitimate campaign against Islamist Fundamentalism and demeans law abiding American citizens.” Numerous instances of Trump’s campaign and message either being directly influenced by anti-Semitic extremists or at least inspiring them have added to the campaign’s unprecedented appeals to division.

It is with all of this in mind that we are obliged to ask the question that no one in the Colorado media seems to be able to ask: why is Larry Mizel backing Donald Trump? It seems to us that if Mizel had a compelling story to tell about his support for Trump, it might help respond to the onslaught of attacks over Trump’s divisiveness. Even if Mizel doesn’t have a good reason for standing by Trump as he offends basically the entire world, the media has an obligation to call him to account as one of the nation’s leading Jewish philanthropists–no matter how influential he may be or what media outlets he furtively buys.

With the media reporting daily now on the massive liability that supporting Donald Trump represents for Republican politicians, it’s time to turn that scrutiny on Trump’s behind-the-scenes enablers like Larry Mizel. Mizel owes the public an explanation for why he, one of the state’s foremost philanthropists and civic leaders, is supporting one of the most divisive politicians in modern American history.