How Do Republicans Solve Their Qaucus Problem?

Here’s a Qonundrum for you: Would you rather be represented in Congress by Colorado Republican Rep. Lauren “Q*Bert” Boebert or Georgia Republican Rep. Marjorie Taylor Greene?

Your answer might depend on when the question is being asked. Boebert and Greene are the leaders of the Republican Qaucus in the House of Representatives, united in their shared belief in QAnon conspiracy theories, inane boilerplate rants, and a “flexible” commitment to law and order in general. On any given day, one of them is making headlines for all the wrong reasons. Q*Bert had been sucking up much of the helium in the room lately, but Greene (MTG) is elbowing her way in front this week.

According to CNN’s KFile, MTG has expressed support on multiple occasions for executing prominent Democratic leaders:

In one post, from January 2019, Greene liked a comment that said “a bullet to the head would be quicker” to remove House Speaker Nancy Pelosi. In other posts, Greene liked comments about executing FBI agents who, in her eyes, were part of the “deep state” working against Trump.

In one Facebook post from April 2018, Greene wrote conspiratorially about the Iran Deal, one of former President Barack Obama’s signature foreign policy achievements. A commenter asked Greene, “Now do we get to hang them ?? Meaning H & O ???,” referring to Obama and Hillary Clinton.

Greene replied, “Stage is being set. Players are being put in place. We must be patient. This must be done perfectly or liberal judges would let them off.”

Yep. An actual Member of Congress has repeatedly suggested that the best way to deal with Democratic politicians is to just kill them. In her defense, an MTG spokesperson says that these comments were made before she was elected to Congress, which somehow makes them…not as terrible? As Aaron Blake responds in The Washington Post:

She is a 46-year-old woman essentially arguing that comments she made when she was 44 don’t reflect upon her today or aren’t relevant. Has she really evolved that much in two years?

These revelations about MTG come at the same time that a debate continues about whether or not Boebert provided help to groups or individuals who took part in the terrorist attack on the U.S. Capitol on January 6. At the very least, it is indisputable that Boebert regularly pals around with known anti-government militia types.

Boebert and MTG didn’t get elected because of their beliefs in crazy conspiracy theories, but you also can’t say that their ascension to political office was in spite of these opinions. Republicans knew exactly what to expect of Boebert and MTG; House Minority Leader Kevin McCarthy responded to questions about both women in November by saying, “our party is very diverse.”

According to Axios, McCarthy is planning to have a conversation with MTG, which is probably not going to accomplish much of anything. As Chris Cillizza writes for CNN, Boebert and MTG aren’t going to stop being a problem for the GOP anytime soon:

No matter how much McCarthy attempts to re-cast Greene as simply an outspoken conservative, it’s ever more clear that this is someone who represents a radical and extreme set of views that should have no business being associated with either of the two major political parties.

Which isn’t to say that Greene should be removed from Congress. While her views are noxious, they were plenty well-known by the voters of Georgia’s 14th district when they chose her as the Republican nominee.

But that doesn’t mean that the Republican Party should actively welcome Greene in their conference by providing her with committee assignments and the other benefits of being affiliated with the Republican Party. Because in so doing, they are condoning these sorts of views as somehow part of the broad spectrum of thought within the GOP.

And that is a very dangerous thing to do — if McCarthy and the rest of Republican leadership wants to have an actual national party going forward. Because a party that allows views like Greene’s to have a seat at the table isn’t one that should be taken seriously. [Pols emphasis] 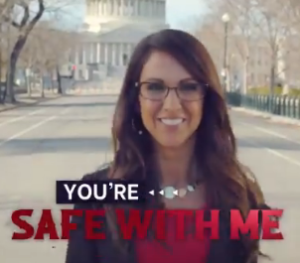 Yeah, not so much.

The warning lights have been flashing here for a long time. Even well-worn right wing megaphones such as The New York Post have tried to leave Boebert on the side of the highway; she is already so toxic that other Republican leaders are being forced to defend themselves merely for appearing next to her in a photo. And, like MTG, Boebert’s QAnon beliefs are irrefutable; there’s no way to spin her own documented words in any other direction.

Boebert and MTG are a package deal in that it’s difficult to see how Republicans could get rid of one and not the other. As long as both of them are in Congress together, there will be no escaping the endless QAnon stories or the chance that any given day one of them will drag the other into the news.

And the longer this continues, the worse it will get for the GOP. Here in Colorado, Boebert is rapidly becoming the face of the Republican Party. Boebert recently endorsed Kristi Burton Brown to become the next Chair of the State Republican Party instead of longtime Republican insider Scott Gessler.

Republicans can have “leadership” or they can have “frazzledrip,” but they can’t have both.