How Toxic Is Lauren Boebert? “Guilt By Association” Toxic

A sincere privilege to meet Secretary of State Pompeo, who has helped MAGA in so many ways. History will look kindly about how President Trump and he handled ISIS, Iran, Middle East peace deals, North Korea, China, etc. Secretary Pompeo is a true patriot! pic.twitter.com/aXdpzzp7ds 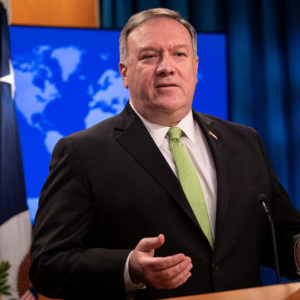 Bryan Lowry, Washington D.C.-based reporter for the Kansas City Star, got a face full of bile when he asked outgoing Secretary of State Mike Pompeo’s staff about the above photo snapped over the weekend with Colorado’s favorite insurrectionist in Congress, Rep. Lauren Boebert:

Secretary of State Mike Pompeo posed for a photo with a Colorado congresswoman who has promoted conspiracy theories and revealed details about House Speaker Nancy Pelosi’s whereabouts on social media during last week’s deadly siege of the U.S. Capitol.

Rep. Lauren Boebert, a freshman Colorado Republican, posted a photo on Twitter Sunday of herself with the nation’s top diplomat — four days after supporters of President Donald Trump stormed the U.S. Capitol in a riot that left five people dead, including a police officer, in the building where Pompeo worked for six years as a Kansas congressman…

Mike Pompeo’s people did not appreciate being asked about this photo with Lauren Boebert.

“The Secretary was honored to speak to the members of the Republican Study Committee at their event on Friday. After which he took pictures with every member of congress and the staff who attended. This story is a piece of shit guilt by association story [Pols emphasis] that further serves to divide our country,” the person close to Pompeo said.

“The secretary takes thousands of pictures every week. Those pictures don’t represent an endorsement of every single belief each of those people hold and it is absurd to imply that through this piece of shit story.” [Pols emphasis]

Got that, folks? A piece of shit story. Pompeo doesn’t endorse everything Boebert believes. We get it.

But herein lies the problem any time one has to resort to defending one’s self from the accusation of “guilt by association.” You’re conceding that somebody’s guilty. Nobody expects Mike Pompeo to endorse every view held by every Congressperson he takes a photo with. In this case, there’s only one subject that matters and everybody knows it.

Also noteworthy, in this Kansas City Star story we have the first response we’ve seen from Boebert anywhere to questions about the Tweets she sent during the opening moments of last week’s failed insurrection, including one two literal minutes after the Capitol was breached announcing that Speaker Nancy Pelosi had been evacuated from the House chambers:

“Some partisan officials and press have chosen to mischaracterize several of my tweets. Let me be clear: I do not support unlawful acts of violence and support the rule of law. Furthermore, my tweets came after both events referenced occurred and I never disclosed secure locations,” Boebert said. “Media outlets were also reporting the exact nature of my tweets via television. I am grateful for the service of law enforcement officers who kept us safe.”

This carefully-worded statement was almost certainly written by legal counsel, and it’s seriously misleading in several key respects. Boebert says that her Tweets occurred “after” the events, but we’re talking about a couple of minutes afterward at most–meaning this information was still highly useful to the insurrectionists roaming the building at that same moment screaming Pelosi’s name.

And folks, the insurrectionists running around the U.S. Capitol smartphones in hand were not watching cable news. They were following Twitter feeds like Lauren Boebert’s. Boebert herself was not watching the news two minutes after rioters breached the Capitol. Why did Boebert find it necessary to tell her 360,000+ Twitter followers anything about Speaker Pelosi’s location while the Capitol was being overrun?

It helps explain why Boebert is avoiding local reporters’ questions, anyway. These are not good answers.