Ron Hanks Uses His Own Insurrection Footage In Campaign Ad

Logging into the permanent record, here’s Republican U.S. Senate candidate “Raging” Ron Hanks breaking what we think could be new ground, which he didn’t when he blew up a copy machine labeled “DOMINION VOTING MACHINE” for his campaign launch video in imitation Marjorie Taylor Greene and others.

In a new campaign video out today, Hanks appears to include footage of himself marching to the Capitol on January 6th, 2021 to witness–bear in mind that Hanks was not himself charged with entering the Capitol or attacking police–what became a violent insurrection to disrupt the certification of Joe Biden’s victory:

We’re not making the mistake of re-uploading Hanks’ video to YouTube this time, since the last time we did our account was hit with a “misinformation strike.” But at about 16 seconds into the ad above, you can see footage from January 6th that includes a man with a green hat and a knit hat walking with the crowd. That’s Rep. Hanks, as you can see in the photo below on the right: 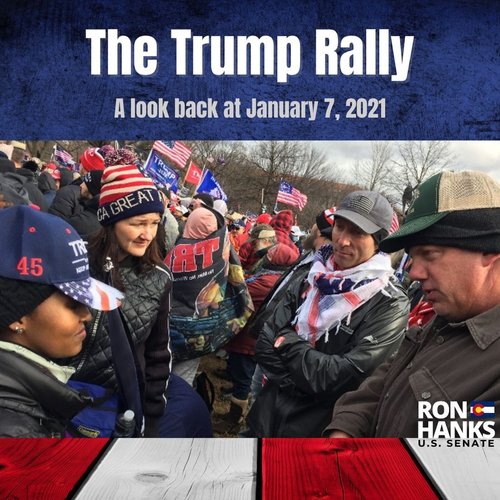 This image is from Hanks’ news page and yes, he meant January 6th. That or his flight home was really memorable.

We never said it was good. We just think he’s the first.