It Is To Laugh: Recall Polis 4.0 (Maybe) Collecting Signatures

Practically from the moment Gov. Jared Polis was elected in 2018, Republicans in the state have been trying to recall him. Immediately following the 2019 legislative session, the first Recall Polis campaign–actually several competing and mutually distrustful campaigns of which one eventually emerged to collect signatures–launched their 60-day window to collect the over 630,000 valid Colorado voters signatures required to qualify a recall question for the statewide ballot. That campaign never turned in their petitions to verify the signatures but only claimed to have gathered around 300,000–less than half what was required, even without the “padding” necessary to withstand validity checks.

The Recall Polis movement should have ended there, but it didn’t. In 2020, the “Recall Polis 2.0” (or Recall Polis 2020) campaign tried again and failed by an unverifiable but presumably even greater margin, lacking even the meager resources that the first attempt had. An unsuccessful court battle to extend their signature gathering time led to promises throughout most of 2021 of an imminent “Recall Polis 3.0” campaign, now expanded to two petitions calling for the recall of Gov. Polis as well as Secretary of State Jena Griswold. Given that the group hasn’t raised enough money to cover even printing petitions for one race, it wasn’t surprising that no campaign to collect signatures ever kicked off. 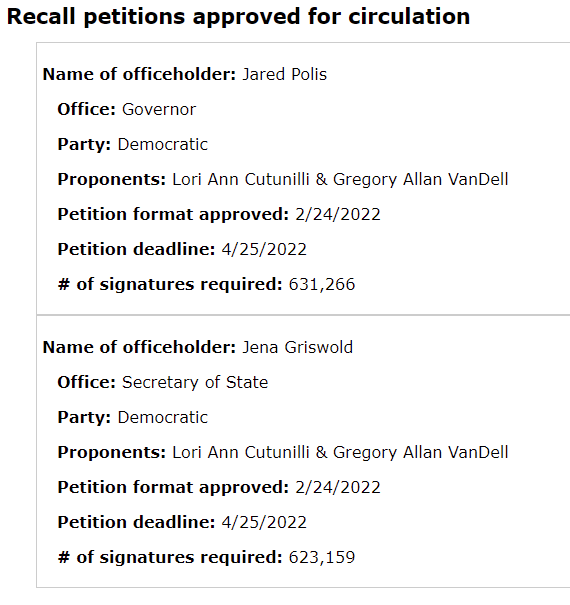 Over at the Recall Polis/Griswold 2022 website, the fundraising page to collect those welfare checks from patriotic invalids is live. The countdown for their 60-day window to collect a total of over 1.2 million valid Colorado voter signatures kicked off last Thursday, so it’s all hands on deck!

Back in 2019, there was a argument that although having zero chance of success, a petition drive to recall Gov. Polis could be a useful activity to keep the conservative base organized ahead of Polis’ next election. Instead, the humiliating failure of every single one of these campaigns helped discredit not just Polis’ opponents but the misuse of recall power in general that has plagued Colorado politics for almost a decade. In 2022, the year Polis is actually up for election, the “Recall Polis 4.0” petition drive is a laughably counterproductive diversion of resources away from what Republicans should always have been focused on: winning this November.

For the next 60 days, get ready for fake news about signatures the recall campaign isn’t really gathering, increasing tension as the realization of futility sets in, concluding in a sad little press conference that absolutely, positively refuses to accept defeat. No voters will be won over by this sloppy exercise, which will serve as a metaphor going into November for failure by Republicans to lay a glove on our state’s popular incumbent governor.

Democrats can only say thanks again.