When we last left the Recall Polis 2.0 campaign back in December of 2020, organizers were attempting to explain to their dismayed volunteers how despite all their best efforts, less than one third of the required 600,000+ signatures that would be required to put a recall question against Gov. Jared Polis on a statewide ballot had been collected–but not to worry, because the campaign was in court trying to win extra time to gather the other overwhelming majority of signatures needed that they couldn’t gather in the allotted 60-day window.

As you might have expected, that didn’t work out either–and at some point their lawyer advised the campaign they were wasting their money:

After 4 months pursuing a 90 day extension through the court, our attorney advised continuing to pursue the extension was not the best use of resources nor the most expedient action to remove Polis from office. 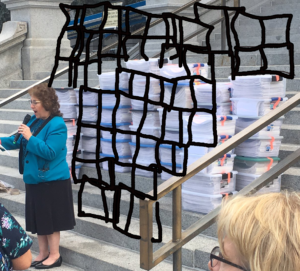 Now, you might think that after two failed recall campaigns, each ending in its own special moment of statewide ridicule when it was no longer possible to conceal their failure after months trying to bluff momentum into existence, that the Polis recallers would at long last hang it up and try to defeat the state’s popular governor the old-fashioned way in the already fast-approaching 2022 general election.

But there’s no fun or money in that, folks! Get ready for Polis Recall 2021:

Reluctantly we agreed to begin again with new charges warranting a Recall and new petitions. [Pols emphasis] During the 4 months in court volunteers have continued to join us with our Team expanding daily…

Polis continues to subject the citizens of Colorado to illegal and unconstitutional restrictions as well as depriving us our unalienable rights as stated in the US Declaration of Independence: Life, Liberty and the Pursuit of Happiness; as such We The People revoke our consent to be governed and will succeed in RECALLING POLIS IN 2021 and replacing him with a Governor with the god [sic-Pols] of the people at heart. Join us! 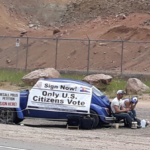 Don’t let the website’s 1990s Geocities look fool you–this campaign is every bit as serious as the last two Recall Polis campaigns, and that means they should be able to raise enough money to make a much better website soon. That’s probably it, though: even setting aside Polis’ durable high approval ratings, Colorado’s very high relative signature threshold for qualifying a recall question for the statewide ballot makes anything like the madness that takes hold in California every couple of decades a pipe dream here.

Whatever happens next, in a way everybody wins: the recall organizers along with their lawyers and vendors get paid, Democrats reap the political benefit from Republicans distracting themselves and alienating voters on another fool’s errand, and Republicans who actually want to win races in 2022…

Well, crap. Somebody loses after all.