Polis Recall: Never Mind The Details, The Grift Is On

UPDATE: A reader astutely points out that Jon Caldara of the Independence Institute has been using his Denver Post column as a vehicle for enthusiastically promoting recalls of late:

My latest for @denverpost. And yes, I think she will be successfully recalled and deserves it. https://t.co/7BAHbGsYmL #coleg #copolitics

We’d say the opportunity for a “dollar sign” (see below) conflict of interest is rather large. Wouldn’t you?

In the last 24 hours, the “campaign” to recall Gov. Jared Polis, which kicked off with a spate of nasty revelations about the anti-Semitic and otherwise unpalatably extreme views of its organizers, has shifted gears–into a new operation run by familiar faces in Colorado politics, and with a new sense of purpose.

“Dollar signs.” Lots of them. Here’s a TL;DR version:

Yesterday, it was announced that former Colorado Secretary of State Scott Gessler has been “retained” as counsel for the Recall Polis organization, presumably to help the group navigate an unprecedented path to collecting over 600,000 valid Colorado voter signatures–many times the amount ever collected in a petition drive before. And that’s not all:

The self-proclaimed official effort to recall @GovofCO Polis has shifted its fundraising from GoFundMe to Freedomfy, a crowdfunding site owned by the Independence Institute. @i2idotorg gets a 6% cut + a transaction fee. #copolitics #9NEWS

In a move just as noteworthy, fundraising for the Recall Polis campaign is being taken over by the Independence Institute , run by longtime local political operative Jon Caldara, and their recently-deployed “Freedomfy” crowdfunding online platform. And with that bit of news, there’s something every person considering a donation to the Recall Polis campaign on “Freedomfy” needs to know: 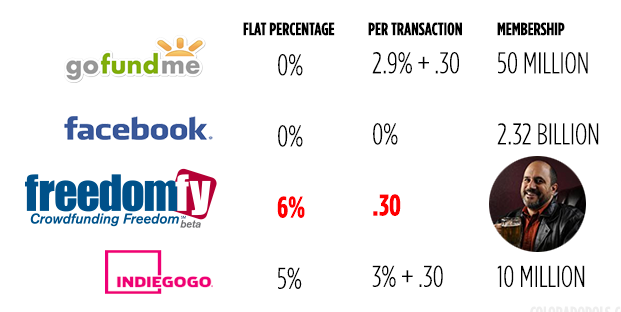 Compared to every major crowdsource fundraising platform with the apparent exception of Indiegogo, “Freedomfy” is ripping you off. The Independence Institute charges an exorbitant fee of 6%, plus 30 cents for every individual transaction. That’s more than double the fees charged by GoFundMe, the platform the Recall Polis organization from is migrating away from. What’s more, GoFundMe has an active pool of over 50 million donors. We don’t know how many members “Freedomfy” has, but it’s not anywhere near 50 million.

We’ve already discussed at length how attempting to recall Gov. Jared Polis, a campaign that can’t even under the state constitution begin until he’s been in office six months, is a fool’s errand logistically. The massive signature requirement to place the question on the ballot would require a multimillion dollar petition gathering operation of unprecedented scale–to say nothing of what the actual recall election would cost proponents if it made the ballot. But that hasn’t dissuaded a strident segment of the Republican base in Colorado from raving.

And where there’s passion, especially poorly thought-out passion, there’s money! Caldara sets up a fundraising stream that he nets the skim from, and Gessler submits billable hours that there is now a stream of money to cover. That’s what they call a sustainable business model. At the end of the day, it doesn’t matter if there’s ever a recall of Gov. Polis–in fact that could be considered a less desirable outcome.

Just like when Ted Harvey discovered he could cash in by sending out fundraising letters with Hillary Clinton’s face on them, turning recalls into cash machines is an end unto itself.