We've had a couple of occasions to note the activity of a federally registered political action committee (PAC) chaired by former GOP Colorado Sen. Ted Harvey of Highlands Ranch. The Stop Hillary PAC has been raising cash off the possibility of a presidential run by Hillary Clinton in 2016 for a couple of years now, often employing such (to put it charitably) lowbrow imagery as this to pry open conservative wallets: 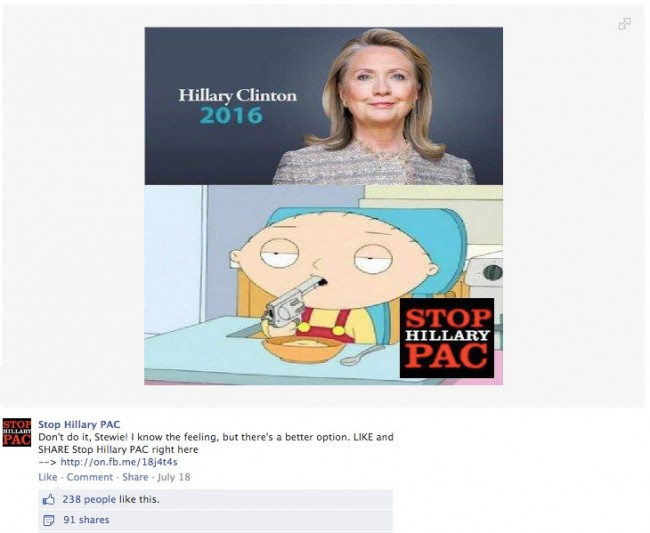 Testing has shown that when I write to potential new supporters, their response nearly doubles if we can promise that their contribution will be matched — doubled or even TRIPLED.

But to recruit those new members we must fully fund our Matching Grant Challenge.

If I could again offer to match all new contributions with a $100,000 special Matching Grant, we will more than double our recruitment efforts.

AND the day Hillary announces, you and I could double down our efforts with $200,000 and another 10,000 supporters.

That is why I sincerely hope you will support our Matching Grant Challenge so we can offer a compelling reason for new members to join us BEFORE Hillary announces.

Got it? If you donate to Ted Harvey's Stop Hillary PAC, you donation could be matched–doubled or even TRIPLED–by others matching your donation. Or maybe you're the one matching somebody else's donation? That's not really clear from Harvey's email, but it's absolutely clear that the one thing you need to do, conservative donor, is give generously to the Stop Hillary PAC. Right now, before you have a chance to think!

Unfortunately for Sen. Harvey, there may be a very large fall in store for this by-all-accounts successful anti-Hillary fundraising operation. As Politico's Kenneth Vogel reports, the Stop Hillary PAC chaired by Ted Harvey was started by a Washington, D.C.-based lawyer named Dan Backer. And there appear to be some troubling questions brewing about Dan Backer and his PACs:

In 2014, Backer’s PACs — a roster including Draft Newt (created to coax the former House speaker into the Virginia Senate race), the Tea Party Leadership Fund (which urged Sarah Palin to run for Senate), Stop Hillary (to oppose the former secretary of state’s expected presidential campaign) [Pols emphasis] and Stop Pelosi (which the Federal Election Commission called out for using the House Democratic leader’s name) — spent more than 87 percent of the $8 million they raised on operating expenses, including $419,000 to Backer’s own law firm, DB Capitol Strategies. By contrast, the amount the PACs spent on donations and ads was about $955,000 — or less than 12 percent of their total fundraising haul. [Pols emphasis]

Something tells us that if Ted Harvey admitted in the above fundraising email that almost 88% of the Stop Hillary PAC's money has gone to "operating expenses" instead of, you know, stopping Hillary, he would raise a lot less money. This is the sort of "overhead" that attracts the attention of the Attorney General in the case of most charities. As in charity fraud.

But apparently for out of work Republican lawmakers, it's how you beat the high cost of living.