Over the past couple of weeks there have been a number of stories about groups organizing to recall Gov. Jared Polis from office. Because Gov. Polis is constitutionally protected from a recall effort for the for six months he is in office, it has not been possible for these groups to gather any signatures, and the massive requirement of over 600,000 valid signatures makes the attempt as a practical matter highly unlikely. Regardless, the agitation is contributing to the current zeitgeist of GOP rebelliousness against Democrats, who won in an historic landslide election in 2018 leaving Republicans with no way of stopping Democrats from passing desired legislation.

But for all the legitimizing press the Polis recall proponents have received this month, there’s been something very important missing–information about the people behind the effort. And as the Greeley Tribune’s Tyler Silvy reports today in one of the biggest stories ever from that media outlet, this data point is extremely significant.

Because some of them are Nazis.

Shane Donnelly is one of the admins for the page, and appears to be in charge, as he has called the page “my group,” and commented that he “created this movement.”

He also once posted that Hitler was good to the German people, and “its time america has someone american.” Donnelly hasn’t responded to a Facebook message seeking comment. [Pols emphasis]

There’s no way we can effectively summarize all the the damning detail in this story, so make sure you click through and read it all. The short version is that an online right-wing activist named Shane Donnelly is the principal organizer of the “official” Polis recall closed Facebook group and the issue committee of the same name. The Tribune reports on a recent split between that organization and another group calling itself the Resist Polis PAC. Regardless it’s Donnelly’s group that has almost 30,000 members, the only hard indicator of support that exists for any of this. 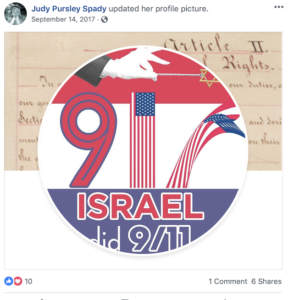 And Shane Donnelly is not the only Nazi in the group.

Then there’s the OFFICIAL RECALL ELECTION COMMITTEE, which would discuss potential candidates for election to take Polis’ place should a recall be successful.

Judy Spady is officially involved with both committees, and she’s also an admin for the Facebook group, earning that title following Good’s exodus.

Spady’s public Facebook page is rife with anti-semitic posts, including a post from September 2017 saying “Israel did 9/11,” and another that credits the western world with creating radical Islam to “use fear to push the Jew World Order.” [Pols emphasis]

Now, let’s compare this revelation to the outrage over Minnesota Democratic Rep. Ilhan Omar’s comments about “allegiance to a foreign power” in reference to support for Israel, the advisability of which remains a subject of hot contention among Democrats after a push to condemn Omar via a resolution went sideways. Republicans of course had no such division in their ranks, if anything with a few like Rep. Ken Buck of Colorado voting against the watered-down Omar resolution because it didn’t single out anti-Semitism above all other forms of oppression:

In the history of the world, no group has suffered more insidious hatred than the Jews. Anti-Semitism can’t be compared with any other hate speech without marginalizing the history of Jewish oppression. I will not vote to overlook the anti-Semitism which has been covered up by the Democratic leadership…

Well folks, we’re sorry to inform Rep. Buck that the campaign to recall Jared Polis–which he’d better handle with care as a candidate for Colorado Republican Party chairman–is run by people who aren’t at all ambiguous in their hatred of Jewish people.

There’s a lot more to say about this, and it’s time for that conversation to happen. It’s not just that these vile fringe figures were given credibility in multiple news reports that they never deserved. The Recall Polis campaign is trading on the same ginned-up outrage as the recall campaign against House members personally fronted by GOP House Minority Leader Patrick Neville. It’s the same message, motivating the same segment of the electorate. If anything, Neville would love to have the nearly 30,000 members of Donnelly’s Recall Polis group give Neville’s relatively obscure Recall Colorado page a like.

This is who they are. If it’s not who you are, and you’re part of their movement, you know what to do.