So You Wanna Recall Jared Polis, Do You? 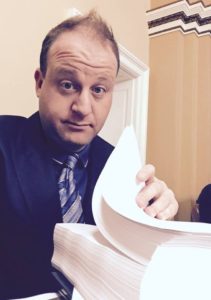 The rules for recalling a governor include collecting signatures from 25 percent of the number of the voters who cast a ballot in the last election for governor.

More than 2.5 million people voted in last year’s governor’s race, said Colorado Secretary of State office spokeswoman Serena Woods. To get the recall on the ballot, the groups will need more than 631,000 signatures in the 60 days after the petition is approved by the state’s office. If they fall short, there will be no recall.

In the past few weeks the rhetoric among Republican agitators has ramped up to a fever pitch, accusing majority Democrats in the legislature and Gov. Jared Polis of the highest imaginable crimes for passing in marathon public hearings the agenda they won the majority in 2018 campaigning on. Zeroing in on three principal grievances–the already-signed bill to join Colorado with the National Popular Vote Compact, a popular “red flag” bill to temporarily remove firearms from people in a mental health crisis, and of course the oil and gas drilling reform measure Senate Bill 19-181–Republicans have openly declared their intention to rekindle the rebellious fires of 2013 and punish Democrats for having the temerity to keep their promises.

If it seems like this is the new normal when Republicans can’t win a straight electoral fight, that’s because it is.

In the legislature, a recall movement is getting underway as an unprecedented in-house campaign operation run by the GOP House Minority Leader Patrick Neville. However that controversial move unfolds, initiating a recall against a statewide officeholder is a far more daunting prospect as evidenced by the massive signature count required to place the question on the ballot. Attempting to recall Gov. Polis, especially after letting passions cool the required six months to obtain a 60-day window to collect many times more valid signatures than a ballot measure requires, is not just a fool’s errand but a significant resource sink for Republicans already beset with infighting and demoralization.

The one thing we know in both cases is that no one can tell these people anything strategic. None of this is about political strategy. It’s about bitterness, ruthlessness, and at least in the case of Clan Neville it’s about money. The only thing that can stop it is…well, failure.

In this case, failure is the most likely outcome.