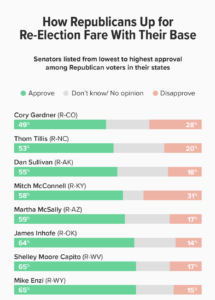 There are currently 20 incumbent Senate Republicans seeking re-election in 2020.

None of them — not one — has a lower approval rating among Republican voters than Colorado Sen. Cory Gardner (R-Yuma).

These are some remarkable numbers, as Morning Consult explains:

Sen. Cory Gardner (R-Colo.) is the least popular Republican with his home base, with 49 percent approving and 28 percent disapproving. But the man viewed widely as the most vulnerable incumbent seeking re-election next year has faced no talk of a serious primary challenger, as several Democrats are lining up for their party’s nod to compete for the seat. [Pols emphasis]

Senate Majority Leader Mitch McConnell (R-Ky.) – America’s least popular senator – experienced a similar, 11-point slide in his net approval among Kentucky Republicans as he looks to his re-election campaign, but his approval with his home base is 58 percent.

According to this data from Morning Consult, Gardner is the only incumbent Republican Senator in the entire country with an approval rating of less than 50% among fellow Republican voters — trailing even the much-despised McConnell. These numbers are not outliers, either; Gardner’s approval ratings have been on a consistent downward spiral since 2016. Last January, we even used the word “loathe” to describe Coloradans’ contempt for Gardner.

Gardner knows all of this, of course, and it actually explains why he votes in lockstep with President Trump’s agenda and was one of the first prominent Republicans to officially endorse Trump’s re-election campaign (Gardner has also been a blindly-loyal soldier for Senate Majority Leader Mitch McConnell on every issue of consequence). None of these things are going to help him win a General Election in 2020, but Gardner seems to be taking his re-election one step at a time; his bigger concern appears to be heading off a potential challenge from his right flank.

We heard rumors in March that Gardner went out of his way to demonstrate his support for Rep. Ken Buck as State Party Chairman in no small part because of concerns that Buck might be considering a Senate Primary in 2020. It’s probably no coincidence that Buck donated $4,000 to Gardner’s re-election campaign literally one day after being selected GOP Chair on March 30:

Gardner has thus far avoided a Republican Primary challenge for two reasons: 1) He and his campaign have actively worked to head off any potential opponents, and 2) There is no obvious Republican name waiting in the wings. But as Morning Consult notes, holding off a Primary challenge means that Gardner will need to both improve his favorability as well as the impression that he is actually paying attention to Colorado:

Nathan Gonzales, who edits and publishes the nonpartisan website Inside Elections, reiterated the difficulty in toppling incumbents via primaries, regardless of their popularity.

“The senators who lost or came close to losing — Dick Lugar, Thad Cochran, Pat Roberts — were hurt more by the lack of time spent in the state rather than a lack of popularity,” he said in an email. “Matt Bevin challenged Mitch McConnell on more ideological grounds in 2014 and lost by 25 points.” 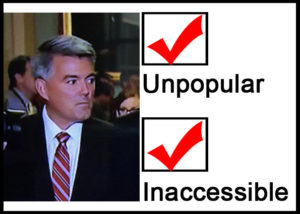 Gardner does show up in Colorado from time to time, but his visits are like a fart in the wind — you only know he’s been there after he’s gone. It wouldn’t be particularly difficult for a Republican such as State Sen. Owen Hill or House Minority Leader Patrick Neville to make a case that they are both more accessible and less-despised than Gardner. It’s not like either Republican is any less likely to win a Republican Senate nomination than, say, Darryl Glenn.

It is now universally-accepted by reporters nationwide that Gardner is the most endangered Senate Republican incumbent in 2020, so there’s not a lot of downside for Republicans considering a different General Election candidate. As FiveThirtyEight.com writes today:

This far out, there’s no public polling showing how Gardner would do against potential Democratic opponents, but a January poll found Gardner trailing a generic Democrat 38 percent to 46 percent. And if recent history is any judge, having to run as a Republican in a Democratic-leaning state at the same time that a presidential race is happening at the top of the ballot will be challenging for Gardner: Every state that had a Senate race in 2016 voted for the same party in both the presidential and Senate election, a first.

Gardner’s fealty to Trump has cost him significantly in Colorado — for just one example, the Denver Post published a stunning UN-dorsement of Gardner in March after his ridiculous flip-flop in support of President Trump’s emergency declaration for wall building money — and these latest polling numbers prove that his Trump love hasn’t done much to help him with Republican voters, either.

There is no obvious potential Republican challenger to Gardner at the moment, but can that really hold true for another year? Sooner or later somebody is going to realize that Republicans may have a better chance of holding this seat without Gardner.