Another Gold Star for Cory Gardner! 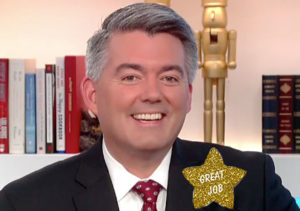 Cory Gardner is the best at attendance.

Senator Cory Gardner (R-Yuma) is the politician equivalent of a toddler in potty training. Sure, he still craps in his pants, but as long as he tries to make it to a toilet first, then confetti falls from the sky in celebration.

Can we raise the bar a little here?

Earlier this month, the editorial board of The Denver Post gave Gardner a great big huzzah because…wait for it…he publicly called on his colleagues to end the federal government shutdown. Of course, this accomplished absolutely nothing, and Gardner spent the next week telling right-wing audiences that he was actually firmly behind President Trump’s border wall shakedown.

On Wednesday, Gardner revealed that he was ready to cast his vote to re-open the government without funding for Trump’s great big border wall. From The Denver Post:

Gardner’s spokesman told us Wednesday he intends to vote for a clean funding bill that would open the government with no increased border-security funding attached.

It’s the right thing to do…

Yes, it is the right thing to do. But Gardner’s declaration is also meaningless because it was announced only after it became clear that Senate legislation to end the shutdown had no chance of passage anyway.

Gardner’s spokesman said Wednesday night that the senator has long opposed shutdowns, including the 2013 shutdown. He said Gardner will also vote for the second measure to open the government.

Gardner likes to say that he is opposed to government shutdowns, as though this is somehow meaningful in preventing or ending legislative stalemates. Saying that you are opposed to a shutdown is like an anti-vaxxer saying that they are opposed to the measles. Nobody is “pro-measles,” but not everybody is going to vaccinate their children to prevent the spread of measles. The important question isn’t, “Do you support measles?,” but, “What are you going to do to prevent the spread of measles?”

If you asked every U.S. Senator if they thought that Congress should pass a continuing resolution to get the government back open, every single one of them would agree. Every. Single. One. Everybody thinks we should end the government shutdown, but Republicans still aren’t willing to put pressure on their President to make it stop. 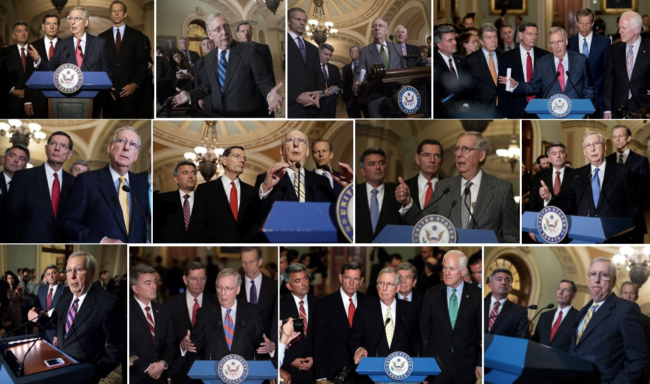 Cory Gardner is not just some rogue Senator

This is the same basic strategy Gardner employed in 2013 when he regularly claimed that he never voted to support a shutdown. Of course, nobody voted in favor of a shutdown — nobody voted against it, either — because that’s not how a shutdown works. Gardner’s words then were as pointless as saying, I never agreed to be allergic to peanuts!

How does Gardner keep getting away with this? Let’s go back to today’s Post editorial once more:

This shutdown has gone on far too long, and there’s no one to blame but Trump. We hope he comes to his senses and agrees to open the government and then consider an immigration reform package that includes money for border security.

President Trump owns this shutdown — as he said he would — and Americans overwhelmingly agree that Trump and Republicans deserve most of the blame here. But TRUMP IS NOT THE ONLY ONE TO BLAME. As Politico reports:

The Senate will take its first votes in more than a month on reopening government. [Pols emphasis] But both a clean spending bill and President Donald Trump’s proposal appear on course to fail.

Though a short-term spending bill giving the president no new border funding bill passed the Senate with no dissent in December, it’s poised to fail on the Senate floor on Thursday. Sens. John Barrasso (R-Wyo.) and Roy Blunt (R-Mo.), the Nos. 3 and 4 GOP leaders, both said Wednesday that the “continuing resolution” cannot pass the Senate.

The House of Representatives has voted numerous times this month in favor of legislation to end the shutdown and re-open various branches of government. Today the Senate is holding its first vote in more than a month on the shutdown, and Republicans don’t have enough support from their own caucus to get anything passed that would end the shutdown. Gardner was recently named a Deputy Whip for Senate Republicans — it’s part of his job to get other Republican Senators to fall in line, and he’s failing at it. So why are we talking about how Gardner plans to vote on a bill that is already dead?

When Gardner says stuff like, “I think we should pass a continuing resolution,” he’s really talking about an imaginary bill that already has the approval of President Trump. He might as well just say, “I think we should fix all of America’s problems.”

What we actually need to know from Gardner and other Senate Republicans is simple: Can you get your colleagues to support overriding a veto of a continuing resolution with no border wall funding? Everything else is irrelevant.

If Cory Gardner can “whip” his Republican colleagues into supporting legislation to end the shutdown and hold firm against President Trump’s veto threats, then we’ll be the first ones in line to pat him on the back. But you don’t get a gold star just for showing up.