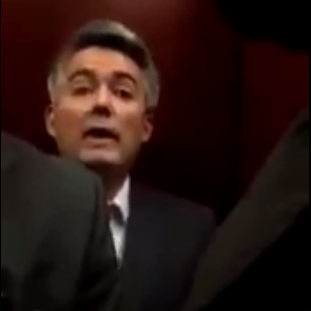 In October of 2014, the Denver Post delivered its much-anticipated endorsement in the red-hot U.S. Senate race between incumbent Democratic Sen. Mark Udall and his Republican challenger Rep. Cory Gardner. The Post’s endorsement of Gardner in this race was delivered more or less on the assurance that Gardner would not represent a threat to the paper’s generally progressive editorial viewpoint, in particular abortion rights after Gardner had invested enormous time and effort living down his stridently anti-abortion record. After Gardner’s narrow win over Udall by less than two percentage points, many Democrats in Colorado took their frustration out on the Post by cancelling their subscriptions–contributing to the paper’s long and steady decline in circulation.

Today, in the wake of Gardner’s brazen about-face on support for President Donald Trump’s controversial national emergency declaration to obtain funds for a border wall without congressional approval, the Denver Post is taking the highly unusual if not unprecedented step of publicly repudiating their own 2014 endorsement of Gardner’s election. Even if you haven’t visited the Denver Post since October 14, 2014, stop what you’re doing and read this now:

We endorsed Sen. Cory Gardner in 2014 because we believed he’d be a statesman. We knew he’d be a conservative voice in Congress, to be certain, but we thought his voice would bring “fresh leadership, energy and ideas.”

Gardner was a never-Trumper in the primary who in recent months endorsed the president’s re-election campaign even as Special Counsel Robert Mueller’s investigation continues to unveil the worst of this administrations web of lies and deceit. Tuesday’s vote was the last straw.

It’s not a perfect retraction–the Post called Gardner’s innumerable votes to repeal the Affordable Care Act “defensible,” which in the context of Gardner’s years-long caterwauling about Coloradans “losing their coverage” is simply ridiculous. There’s also an attempt to defend the paper’s endorsement last year of Rep. Mike Coffman, which tells us they’re still capable of being fooled in the exact same manner that Gardner fooled them in 2014. In the end the voters of CD-6 saw through Coffman’s deceptions where the Post didn’t.

But where Gardner is concerned, if there was any doubt that the shine has come off Colorado’s most ambitious and highest-ranking remaining Republican elected official, this un-endorsement puts it to rest. Gardner isn’t just vulnerable on paper in a state trending away from Gardner’s party. Gardner’s game is personally up.