It’s a tough position to be in. 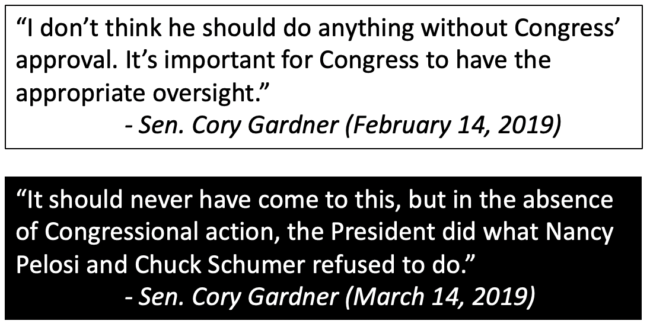 Sen Cory Gardner backs Trump’s declaration of a national emergency at the border with Mexico. (R up for re-election in a blue-ish state) pic.twitter.com/WHGGtJcs07

The final vote tally is 59-41 in support of the resolution.

As CNN reports, the Trump administration is preparing for an embarrassing vote from the U.S. Senate today on the President’s “emergency declaration” for border wall money:

Three Republican senators made a last-ditch effort Wednesday night to strike a bargain with President Donald Trump and help him avoid an embarrassing defeat in the Senate over his national emergency declaration.

South Carolina Sen. Lindsey Graham phoned Trump while he was in the car on Pennsylvania Avenue to inform him that he, Texas Sen. Ted Cruz and Nebraska Sen. Ben Sasse were on the way.

Graham said the group “barged” into dinner last night and he made clear that if the President would support a proposal from Republican Sen. Mike Lee of Utah to limit the length of national emergency declarations, then it would minimize Republican defections “dramatically.”

The trio had made an unsuccessful attempt earlier in the afternoon to sit down with Trump, but White House aides said it was too late and didn’t see the point in bringing them over. Trump had already told staff he was resigned to issuing his first veto after it became clear that enough Republicans will support the measure to overturn the declaration.

According to CNN, the White House expects as many as 14 Republican Senators to support the bill (the House has already approved the measure), which President Trump has promised to veto. Republican Senators Mitt Romney of Utah and Lamar Alexander of Tennessee announced this morning that they would oppose Trump’s fake emergency.

A vote for today’s resolution by Republican Senators is a vote for Nancy Pelosi, Crime, and the Open Border Democrats!

We still don’t know what Sen. Cory Gardner (R-Yuma) plans to do today after weeks of cringeworthy waffling on the proposal. It was one month ago to the day that Gardner told Ryan Warner of Colorado Public Radio that he had personally advised Trump against the “emergency declaration”; Trump went ahead and signed the order that same afternoon, and Gardner quickly began backpedaling on his opposition.

Most Americans disagree with Trump’s “emergency,” but Gardner has shown an unusual (for him) level of loyalty to Trump in recent months (see: Wednesday’s weird vote to stand with Trump on American involvement in Yemen’s civil war). Gardner could support the measure to rebuke Trump on his emergency declaration, which would align with the thinking of Colorado voters in general, though that would make weeks of waffling seem especially pointless.

In the end, Gardner may be too terrified of Trump (and his rabid base) to do anything other than line up behind the big orange guy. One way or the other, it’s about time for Gardner to rip off this band-aid.