Morning Consult is out today with its quarterly update of the latest approval ratings for each United States Senator, and our own Sen. Cory Gardner (R-Yuma) is nearly upside-down in the approval department. With an “approval” rating of just 40% and a “disapproval” rating of 39%, Gardner qualifies as the 8th-most disliked Senator in the United States.

On the bright side, there are 7 other U.S. Senators more disliked than Gardner.

As Morning Consult explains, Gardner’s negative momentum is virtually unmatched across the country:

Since Morning Consult’s last release in July, West Virginians’ approval of Capito has fallen 8 points, from 56 percent to 48 percent, according to the survey. At the same time, her disapproval rose 10 points, from 26 percent to 36 percent. 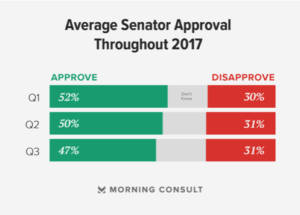 It’s also important to note that Gardner isn’t just suffering from a general dislike of Congress in general — his approval/disapproval ratings are nowhere near the average marks for U.S. Senators in 2017. Gardner’s 40% approval rating is 7 points lower than average; his 39% disapproval number is 8 points worse than the mean.

So, yeah, it sucks to be Cory Gardner.