In late October 2017, Colorado Sen. Cory Gardner (R-Yuma) sent out this Tweet about the “Upside Down world” that became a central plot point in the popular Netflix series Stranger Things. Gardner’s comment was an unintentionally-apt description of his own political fortunes; as far as public polling is concerned, Gardner is comfortably ensconced in his own “upside down” world.

For the last year or so, we’ve been following Gardner’s plummeting poll numbers with fascination, wondering when they might possibly bottom-out. Just how low can Gardner go? According to the results of a new poll from the American Politics Research Lab (APRL) at the University of Colorado, we still don’t know the answer to that question.

Polling results from APRL show Gardner with a miserable 25% approval rating, with just 38% of Republicans admitting that they have a favorable opinion of the Republican Senator. For Gardner, the only bright side to these horrific numbers is that they aren’t any worse. 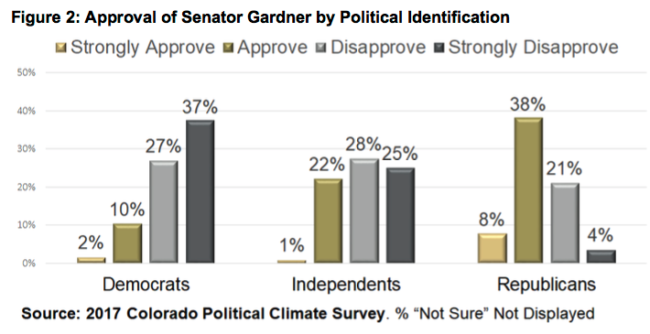 To understand the gravity of these numbers for Gardner, consider this: Donald Trump is the most disliked President in the history of polling, with an approval rating that averages out to about 39% (via 538.com). If Gardner’s numbers were to somehow rise to this level, his staff would throw a party.

Voters are almost evenly split on Udall, with 41 percent disapproving of his job as senator compared with 40 percent approving. That’s down from a 50 percent to 33 percent approval in April.

Udall’s numbers likely jumped around a bit in 2014, but from March 2010 through August 2013, the former Democratic Senator was typically polling in the mid-40s and never dropped below 36%. In October 2014, just a few weeks before Election Day, Udall had an approval rating of 45%. As best we can tell, the last time Gardner was polling near that number was in July 2015, when Quinnipiac University listed him with a 48% approval rating.

Poll numbers for politicians will invariably go up and down during their time in office, but it’s really hard to drop as far as Gardner has fallen in the last year.

Gardner endured an absolutely brutal year in 2017, and from the look of things, 2018 isn’t going be be much better. We’ve said before in this space that it is not too early to wonder about Gardner’s political future when his first term expires shortly after the 2020 election. If Gardner can’t figure out a way to improve his image, don’t be surprised if his name isn’t even on the ballot in two years.