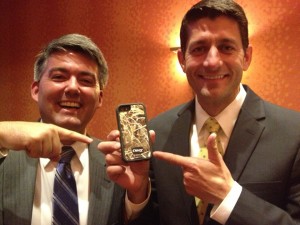 Rep. Paul Ryan poses with then-Rep. Cory Gardner. Four years from now, both might be gone from the halls of Congress.

Colorado has had seven U.S. Senators since 1990. Three have been re-elected at least once: Republican Ben “Nighthorse” Campbell, Republican Wayne Allard, and Democrat Michael Bennet. As for the other four: Republican Hank Brown retired after one term, Democrat Ken Salazar left early to become Interior Secretary, and Democrat Mark Udall lost his bid for re-election in 2014 to Republican Cory Gardner.

In modern Colorado political history, our elected Senators have been more likely to retire or leave the job early than to be rejected by voters. In fact, only one incumbent Senator other than Udall has lost a re-election bid since 1978 (Democratic Sen. Floyd Haskell lost to Republican Bill Armstrong that year). Colorado’s next Senate election isn’t scheduled until 2020, when Gardner will be nearing the end of his first six-year term, but recent other high-profile decisions to retire or not run for re-election are turning many local eyes toward the Yuma Republican.

The most recent example is that of House Speaker Paul Ryan, who is reportedly intent on leaving Congress in 2018 rather than run for another term. As Politico wrote this week:

Ryan was tiring of D.C. even before reluctantly accepting the speakership. He told his predecessor, John Boehner, that it would be his last job in politics—and that it wasn’t a long-term proposition. In the months following Trump’s victory, he began contemplating the scenarios of his departure. More recently, over closely held conversations with his kitchen cabinet, Ryan’s preference has become clear: He would like to serve through Election Day 2018 and retire ahead of the next Congress. This would give Ryan a final legislative year to chase his second white whale, entitlement reform, while using his unrivaled fundraising prowess to help protect the House majority—all with the benefit of averting an ugly internecine power struggle during election season.

There are some obvious similarities between Ryan and Gardner. Both are 40-something lawmakers with ambitions to roam the White House one day, and both are seeing their political careers bogged down by intense Republican infighting and the daily whims of a President whose very existence (and massive unpopularity) threatens other Republican politicians around the country.

Gardner does not have nearly the national name-recognition of Ryan, but he is starting to get more national notice for the wrong reasons. In just the last couple of months, Gardner has struggled to raise money as the head of the National Republican Senatorial Committee (NRSC) while facing difficult questions about a large-scale donor list theft that took place under his watch. Gardner was lampooned during the monologue of “The Tonight Show with Jimmy Fallon” just a few weeks ago, and earlier this week a political panel on CNN openly laughed at Gardner’s absurd statement that Democrat Doug Jones should vote with Republicans once he takes his seat as Alabama’s junior Senator. Gardner’s Senate office is barely functional, and his approval ratings are in the toilet as the eighth-least liked Senator in the entire country. Social media users seem to hate Gardner even more than they dislike President Twitterer himself.

If President Trump is somehow still in the White House in 2020, then he’s likely going to be running for re-election. Team Gardner can’t be very enthusiastic about the idea of sharing the same ballot as the most unpopular President in the history of polling, and Gardner may come to the same conclusion as Ryan: That in order to live and fight another political battle he would be best-served by going away for awhile.

We don’t need to tell you that a lot can change in three years, but this current political trajectory does not favor a Gardner re-election campaign. There is a massive Blue Wave coming to America in 2018, and perhaps beyond, thanks in part to the insistence of Congressional Republicans on passing the least-popular legislative proposals in a generation. Republican efforts to dismantle Obamacare and give away massive tax breaks to the rich are not going over well with American voters — and Gardner has been at the front of the parade on both issues (he votes with President Trump more than 94% of the time).

For a politician as young as Gardner, it may make more sense for him to walk away before 2020 than to risk a crushing re-election loss just six years after being hailed as one of the GOP’s brightest stars. It certainly would not be an unprecedented move in Colorado.

Gardner had visions of running for President in 2020 had Democrat Hillary Clinton defeated Trump in 2016. Even if Trump is not the GOP candidate for President in 2020, it’s going to be damn near impossible for any Republican to maintain the support of Trumpians while still appearing reasonable to a general electorate.

In politics, timing can be everything. Gardner’s 2014 timing was perfect; everything since then has been an absolute mess. Gardner may well decide that 2020 will be time for him to do something else.