Sen. Cory Gardner (right) has been fully onboard with President Trump.

Over at FiveThirtyEight, Perry Bacon Jr. is looking ahead to the next Congress and wondering which Senators will be the new “swing votes.” Bacon thinks that Sen. Cory Gardner (R-Yuma) may fit the mold:

We can stop obsessing so much about how Sens. Susan Collins and Lisa Murkowski are going to vote. Long the crucial swing votes in the U.S. Senate, they will still be crucial to the GOP’s majority, but for the next two years, when the Senate considers legislation that Democrats unanimously oppose, the real deciders are likely to be Cory Gardner and Mitt Romney.

Bacon’s premise is based on a logical course of action for Gardner, making the assumption that Gardner both should and will attempt to moderate his image as he prepares to run for re-election in 2020:

Colorado’s Gardner has a more obvious reason to potentially vote against controversial Trump appointees and judges: political survival. It’s hard to see Trump winning Colorado in 2020 — he lost there by 5 percentage points in 2016. When Gardner is up for re-election in 2020, he will likely need some Democrats or independents to back him even as they vote against Trump. And at least right now, it would be hard for Gardner to separate himself from the president: He backs the Trump position 91 percent of the time. And, among the 100 current senators, he is tops in voting with Trump more often than the political ideology of his state would predict. [Pols emphasis]

Being a Republican in a blue state who almost always backs Trump and GOP initiatives is politically dangerous. Nevada’s Dean Heller, who was the last Congress’s second-most pro-Trump senator compared to his state’s politics, can attest to that — he just lost his re-election race.

It’s not difficult to argue that Gardner should try to move more to the middle if he hopes to earn another term in the Senate, particularly given that he will appear on the same ballot as President Trump in a state that just saw massive Democratic gains. It’s also not entirely clear that Gardner intends to make such a strategic shift even if he should. Gardner sounded very Trumpish following the 2018 election; he claimed that Colorado did not witness a “Blue Wave” despite the fact that everyone in the state is sopping wet, and he fed wild conspiracy theories to explain Republican troubles in states such as Arizona.

Gardner’s longtime right-hand man, Chris Hansen, recently made it clear that Republicans are running with President Trump “no matter what,” which presumably includes Colorado in 2020. Gardner’s increasingly-public appearances with the President make any obfuscation all the more difficult.

The more important question, then, is whether Gardner can make a meaningful move to the middle after how he has so clearly fallen in behind Donald Trump (and even though it often backfires on him). As you can see from the chart below, Gardner has voted with Trump to a degree that absolutely does not reflect the will of Coloradans: 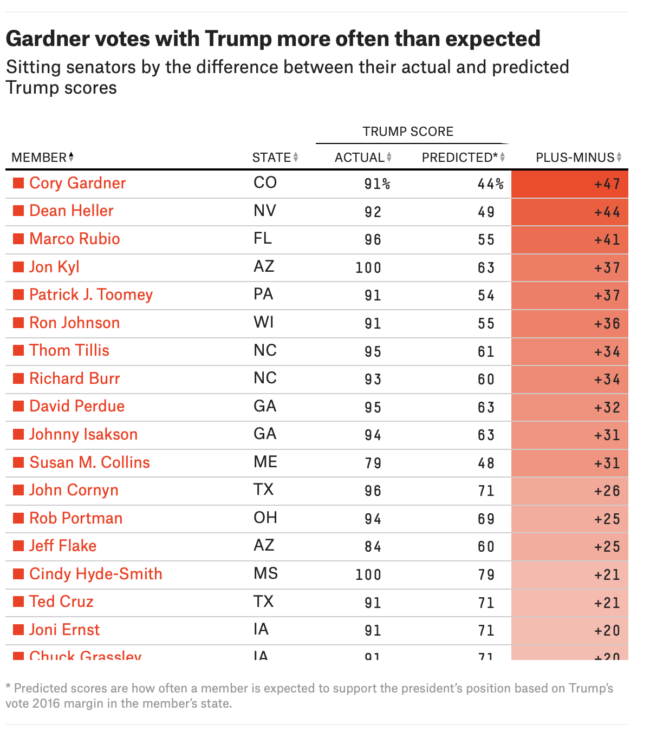 That Gardner has a natural tendency to say one thing and do the opposite has not been lost on Coloradans. Gardner’s approval ratings have been consistently terrible since the 2016 election, and he’s not just unpopular with Democrats and Unaffiliated voters — his Republican base isn’t particularly fond of him, either. President Trump is not viewed favorably in Colorado, but the Big Orange Guy isn’t nearly as disliked as Gardner. In fact, Gardner could be dealing with a Primary challenge before he even gets a chance to worry about a General Election. In that case, he’ll face more pressure to move ever rightward in order to preserve his hold on the GOP nomination.

In the 2014 election, Gardner famously said that he wanted to “shake up the Senate.” Perhaps he’ll actually try to do that in 2019 and become something like the “swing vote” that FiveThirtyEight envisions.

Or maybe Cory Gardner just is who he is.