FRIDAY UPDATE: As the Washington Post reports, Congressional Republicans are very aware of the political problem they have in not protecting pre-existing conditions:

With less than a month before the midterm elections, endangered Republican lawmakers are mounting a defense against attacks they’re trying to dismantle a core element of the health-care law they fought to eliminate.

Democratic candidates on the campaign trail now regularly accuse Republicans of wanting to take away health-care protections for people with preexisting conditions. They’ve pointed to a lawsuit brought by 20 attorneys general in Republican-led states aiming to overturn the Affordable Care Act as proof the GOP wants to let such protections go down with the health-care law. That’s after Republicans whiffed in their effort to repeal and replace the ACA  last summer.

Vulnerable Republican contenders are responding to the slams by airing campaign ads saying they embrace this portion of the ACA. They’re also introducing a wave of bills in Congress they say would protect those with prior illnesses from losing access to affordable health care. But experts question the efficacy of those measures, saying they seem more designed as protection against Democratic attacks than significant policy solutions, as I helped report in a story with Colby Itkowitz this week. [Pols emphasis]

Healthcare has consistently emerged as the single most important issue for American voters in 2018. When you dig deeper into the numbers, you find that protections for pre-existing conditions — a key component of the Affordable Care Act (ACA) — are extremely popular across all political spectrums. As the Kaiser Family Foundation reported last month:

Large majorities of Americans say it is “very important” to retain the ACA provisions that prevent insurance companies from denying coverage based on a person’s medical history (75%) and from charging sick people more (72%). This includes majorities of Democrats, independents and Republicans, as well as majorities of those with and without people with pre-existing conditions in their households.

On Wednesday, the U.S. Senate took a vote on a measure that sought to get rid of Trump administration efforts to expand short-term health insurance plans (which are often called “junk insurance”) that are intended to kill the ACA, and thus, protections for pre-existing conditions. Senator Michael Bennet (D-Denver) voted “YES,” and Sen. Cory Gardner (R-Yuma) was a big fat “NO.” Republican Senator Susan Collins of Maine voted along with Democrats, but that wasn’t enough to change a 50-50 tie in the Senate. In political terms, this means that you can call Gardner a deciding vote.

The 2010 ACA law allowed the sale of short-term insurance plans to serve as a stop-gap between long-term plans. The Trump Administration’s rule allows those plans to be extended as long as three years.

The plans are cheaper than long-term plans but do not offer the same level of coverage as plans that comply with the ACA; prescription drugs, pre-existing conditions, pregnancy and mental health coverage are not required to be covered in these short-term plans. 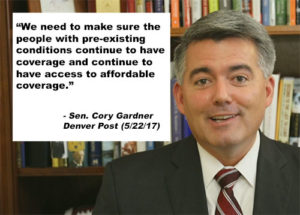 You didn’t seriously believe me, did you?

Anyhoo, let’s get back to Gardner. Colorado’s Republican Senator talks a good amount of gibberish when it comes to healthcare policy (we’ll never forget you, “glide path“), but he generally speaks favorably when it comes to protections for pre-existing conditions. Here’s Gardner in May 2017, via The Denver Post:

Gardner was also asked about what he would do about those people who are worried about losing health care coverage with pre-existing conditions if the Affordable Care Act is repealed and replaced.

“Over the past couple of years, my mom survived breast cancer,” Gardner said. “Over the past several weeks, my father has been in and out of the hospital. I haven’t heard anyone say we’re going to get rid of pre-existing conditions coverage.” [Pols emphasis]

Gardner said he is pushing for affordability to make sure insurance is accessible to people with pre-existing conditions.