Cory Gardner Talks Healthcare, and It Is Absolute Nonsense 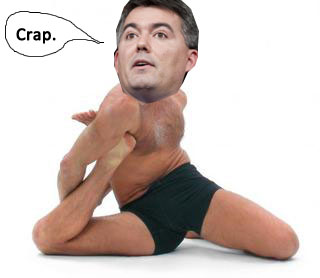 Colorado Republican Sen. Cory Gardner has been going out of his way to avoid talking about the Senate healthcare bill, even though he was part of the original “Group of 13” Senators charged with drafting the legislation. Gardner doesn’t meet with constituents and won’t provide substantive answers to the media about his position on the Better Care Reconciliation Act (BCRA), and even longtime Gardner cheerleaders like the Denver Post have grown tired of his healthcare dance (see HERE and HERE).

Gardner owes his entire Congressional career to opposing Obamacare. He maintains that he is committed to the destruction of the Affordable Care Act, which Gardner is “imploding” in front of our eyes, but his boiler-plate responses to constituent concerns are as vapid and nonsensical as Donald Trump’s Twitter account. If you’ve wondered why Gardner keeps ducking the issue and avoiding town-hall meetings, consider a brief healthcare discussion Gardner had with a group of constituents from Denver on Thursday. As this newly-available transcript shows, Gardner’s Trumpcare talking points are an absolute disaster.

On Thursday, Gardner apparently spoke on the phone to a handful of people from the group “Democratic Socialists of America,” who were more than ready to ask the kind of tough questions that any good journalist would love to hear. The full transcript is available at Scribd, but we’ll break down some of the key sections for you after the jump. Of note, Gardner continues to insist that BCRA is a “discussion draft,” and he also makes it clear that he won’t support any legislation that fails to make health insurance affordable while protecting pre-existing conditions (none of which are accomplished under BCRA)…

When the BCRA legislation was introduced to the public in late June, Gardner claimed that he had not seen any of the text – nevermind that he was part of the “Group of 13” crafting the bill — and then began to insist that the legislation was just a “discussion draft” and not a formal bill. This, of course, is complete nonsense; Senate Majority Leader Mitch McConnell tried unsuccessfully to push a floor vote on BCRA before the July 4th recess. The legislation also received an official score from the Congressional Budget Office (CBO) on June 26, which is not something that normally happens with a “discussion draft.”

In his conversation on Thursday, Gardner goes right into this ridiculous script after the first question, from a constituent identified as “Chris”:

CHRIS: [Healthcare legislation] is extremely important to your constituents, and that’s who you’re meant to represent. So I’d like to hear from you what you intend to do.

GARDNER: Yeah, you bet. Well, first of all, the bill that was presented last week was a discussion draft, and there are a number of discussions taking place around the draft and how to put something in lace of the Affordable Care Act that will work to improve our health care and to alleviate many of the concerns that were created by the Affordable Care Act. And so, I have not seen any new legislation or draft, and I have not said I would vote for the bill. I have not said that I would not vote against the bill because I don’t know what we’re voting on. Because nothing has been put forward on the schedule or calendar to vote, and so these decisions – these discussions are very important to have…

First off, there may be no better sentence that captures the very essence of Cory Gardner than this one: “I have not said that I would not vote against the bill because I don’t know what we’re voting on.” Gardner again says here that he has not seen the BCRA legislation — though he somehow seems to know what is included in the bill – which seems to confuse the people on the other end of the line:

CHRIS: You’ve seen the bill proposed, that’s been circulating in the Senate, yes?

CHRIS: And it has had a score from the Congressional Budget Office, and it’s pretty abysmal. And it’s been estimated that 22 million Americans will lose their insurance with this bill on top of the many who already don’t have insurance under the Affordable Care Act. So I don’t see how it could be any improvement, this bill. And it was tried to bring to a vote, and it was postponed…

CORALEE: Exactly. I don’t understand why you call it a discussion draft when the Republicans were trying to push it through with a vote…

GARDNER: Can you hold on a second? Would you mind speaking a little closer to the phone? I couldn’t quite hear that.

“Coralee” summarizes her question before “Chris” asks pointedly, “Would you vote no on the bill that you’ve seen, if it came to a Senate vote?”

GARDNER: Well, it couldn’t come to a Senate vote, so I’m not going to comment on how I would vote on a bill that didn’t appear before us for a vote.

Gardner has had no problem commenting on BCRA previously, including in the earlier stages of this phone call. But when faced with a question he doesn’t want to answer, Gardner essentially pretends that BCRA doesn’t exist. Gardner then questions the accuracy of the CBO score — which doesn’t help his argument that BCRA doesn’t exist — and throws out a bunch of platitudes about Congress working together on healthcare policy.

CHRIS: And we’re gonna stay here, we’ll be in your office until we hear from you to commit no, commit to vote no on this bill if it reaches a Senate vote.

GARDNER: …I appreciate the feedback and certainly look forward to many more conversations across the state, but again, I, we haven’t seen the final product that we’re going to be voting on, and so I can’t say that I’m going to vote yes or no on a bill that I haven’t seen to be voted on.

If this answer sounds familiar, you may remember when Gardner insisted, repeatedly, that there “was no federal Personhood bill.”  Gardner’s “Personhood” response was complete nonsense, and he was regularly called out by journalists such as Kyle Clark and Eli Stokols.

Let’s get back to Thursday’s discussion and another pointed question from a constituent:

JEREMY: How many Americans are you comfortable with losing insurance?

GARDNER: Well, what we’re trying to do is have insurance that you can actually use…

Gardner doesn’t actually answer the question from “Jeremy,” which leads to this follow-up response:

JEREMY: But they will reduce the price on your premium by increasing your deductible and by eliminating coverage for pre-existing conditions.

GARDNER: That’s a very important thing you point out. Right.

JEREMY: And so therefore…

GARDNER: …So thus any new bill should lower your premiums, but still keep high insurance deductibles that that’s something we have to avoid as well.

Remember this quote from Gardner: “any new bill should lower your premiums.” The current Senate healthcare bill will absolutely NOT lower health insurance premiums.

At this point in the discussion, Gardner talks about the pitfalls of a “government option or single-payer system,” until “Chris” tries to get back to the question of whether Gardner supports BCRA.

CHRIS: I’d like to ask again, the bill that’s in the Senate, the BCRA – it even has a name – I’m wondering, since you’ve seen that draft, and since it nearly came to a vote, would you vote no on that and represent the needs of Colorado?

GARDNER: You just answered the question, too, by calling it a draft.

CHRIS: You called it a draft, sir, not I.

GARDNER: Uh, okay, well, it was a draft. And again, it was a discussion draft is how the sponsor of the bill characterized it, and so I’m not gonna say I would have voted yes or no on that bill because it was obviously under a tremendous about of debate…

There was no public debate of BCRA. The bill was crafted in secret and McConnell tried to rush it to a floor vote without discussion. These points are not debatable.

CHRIS: Will you vote no on any bill that comes to the Senate floor that is a massive tax cut for the wealthy and strips veterans and poor people of their Medicaid coverage?

GARDNER: Well, I’ll vote against a bill that I believe doesn’t accomplish sustainability in Medicaid or help address the market stability issues and the other things that we talked about.

“Jeremy” brings up the fact that Colorado has spending restrictions because of TABOR, which prompts Gardner to return to one of his favorite phrases:

GARDNER: And again, that’s another very important point. That’s why I talked about the glide path if there is a transition on Medicaid…

JESS: When you’re saying transition from Medicare, or Medicaid, do you mean dropping coverage for people who are covered by Medicaid?

GARDNER: What I was talking about was the glide path that was proposed in some of the ideas in moving to a per capita cap. That’s what I’m talking about.

JESS: So you have nice names for what is really taking away care from people, is that what you’re talking about? It’s removing Medicaid.

GARDNER: What I’m talking about is making sure it’s sustainable, and because if we don’t have a sustainable program in place, I do worry about our ability to make sure we have the most vulnerable amongst us and the people who need help the most have the ability to continue to gain access.

Gardner ends the conversation here by saying he is about to “lose coverage” on his mobile phone. Seriously.

In short, Gardner may or may not have read the Senate healthcare legislation (again, nevermind that he was part of the “Group of 13” that worked on the bill), but even if he did read it, Gardner insists that it was just a “discussion draft” and not a real bill. Gardner also says that he will not support legislation that does not reduce healthcare premiums and does not protect pre-existing conditions, which, if true, means that he cannot possibly support BCRA.

But, you know, that’s all hypothetical. Or something.