Where is Cory Gardner?

Anybody seen Sen. Cory Gardner? Anyone?

The Fourth of July weekend is always a popular time to find politicians outside shaking hands, kissing babies, and taking selfies with constituents. Congress is in the middle of its 10-day July 4th recess, and across the country elected officials (most of them, anyway) were marching in parades and pressing the flesh at community gatherings.

But not Cory Gardner.

As the New York Times reports, Sen. Cory Gardner (R-Yuma) was nowhere to be found over the holiday weekend:

“Never before, in the 15 times that I’ve marched in this parade, have I had people so focused on a single issue,” Senator Susan Collins of Maine, who rejected the latest version of the bill, said in an interview shortly after walking the parade route in Eastport, Me. “I think it’s because health care is so personal.”…

…At a late-morning parade in Ely, a small city in northern Nevada surrounded for miles by only sagebrush and juniper trees, Senator Dean Heller, who has come out against the bill, rode down Aultman Street on a horse…

...This was still more activity than anything done by Mr. Gardner of Colorado, who has not held a town hall-style meeting this year. Coloradans have noticed. [Pols emphasis] In February, hundreds gathered for a mock town hall-style meeting in Denver, where they addressed questions to a cardboard cutout of the senator. Last week, wheelchair-bound constituents occupied his office for 60 hours in protest of cuts proposed in the health bill, before being dragged out by the police.

Mr. Gardner’s Fourth of July was devoid of public events, though on July 3, he could be seen on his front lawn in his hometown, Yuma, playing with squirt guns and smoke bombs with his children.

This was as combative as his holiday was likely to get. Even though one in four residents of Yuma County receives Medicaid assistance, and many would probably lose their health care coverage under the Senate bill, those who disagree around Yuma tend to keep quiet. 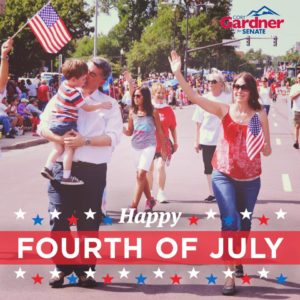 This picture of Gardner marching in a parade — posted on Facebook Tuesday — is NOT from 2017.

Prior to this year, Gardner had been a regular presence during the July 4th weekend in Colorado. One of Gardner’s Facebook accounts on Tuesday included a picture of the Senator marching in a parade along with the text: “Happy Fourth of July.” There was no mention of the fact that this photo was NOT a recent picture.

Gardner hasn’t held a town hall event in more than 462 days. As the Times reported, Gardner is in Colorado, which was not the case during the last long Congressional recess around Memorial Day.

So, where is Gardner? The Washington Post zeroed-in on America’s missing Senators and the healthcare debacle:

Republicans, who skipped the usual committee process in the hopes of passing a bill quickly, are spending the Fourth of July recess fending off protesters, low poll numbers and newspaper front pages that warn of shuttered hospitals and 22 million people being shunted off their insurance…

…Activists are encouraging one another to get more ambitious — and creative. Protesters in Colorado got headlines for sitting down at one of Sen. Cory Gardner’s (R-Colo.) offices and refusing to leave. The progressive Action Network urged protesters to wage more sit-ins on Thursday.

The front page of today’s Denver Post is a hefty feature on protestors with disabilities and the group ADAPT; protestors made national news last week when Gardner’s office chose to have the Denver police arrest a group of protestors rather than give them an audience with their elected official. Gardner’s refusal to speak about a healthcare bill his supposedly helped to craft has even drawn the ire of the normally-supportive Denver Post editorial board; last weekend the Post ran editorials on consecutive days questioning Gardner’s leadership on the healthcare bill and as a Senator in general. Take a look at what the Post wrote in a Sunday editorial:

Gardner’s silence on what he’d like to see changed in the bill is deafening in a state where a shockingly high percent of voters support a more liberal approach to health care.

Our first-term Republican senator needs to think long and hard about who he represents and what he stands for. [Pols emphasis]

He needs to spend his break telling constituents how he’d like to fix health care and why he’s the right man for the job in D.C. Because now there is clear reason for doubt. While he’s shown himself too skilled at dodging town hall meetings of constituents of late, Gardner can’t escape the public record. Gardner was one of the select members of a working group meant to inform McConnell’s bill…

…Nothing about the path he is on will be easy, but if Gardner wants to prove his mettle as a leader, this is his chance.

He ought to take it. [Pols emphasis]

It certainly appears as though Gardner has no intention of taking the Post’s advice and becoming a real leader for Coloradans. Gardner does make occasional appearances in Colorado, but only if he knows the audience will be friendly. He appeared at the big Koch Brothers retreat in Colorado Springs in late June and is scheduled to speak at the Western Conservative Summit in Denver later this month.

We’ve often said in this space that the cardinal sin for any politician is to ignore his or her constituents — especially when people are desperate to hear from them. The Senate healthcare bill is in trouble, and we don’t doubt that Gardner would rather not listen to conflicting opinions on the measure. But if Gardner isn’t willing to face the people he is supposed to represent, then he should find a different occupation.