This is what it looks like when Cory Gardner works on important issues.

Politics is no different than any other industry in the world in one regard: Everyone always wants to know about the “next” big thing. We all like to gaze at shiny new objects and project the next transcendent athlete or business leader or movie star.

Colorado Sen. Cory Gardner (R-Yuma) has been labeled a “rising star” by local and national media outlets for many years, but given everything we’ve seen in the past couple of months, it’s time to rethink this outlook. Gardner has risen to the ranks of leadership in the Republican Senate, where he is in charge of GOP efforts to maintain their Senate majority in 2018. He is a young elected official in a legislative body where the average age is 61 years old. He is cherubic, camera-friendly and an expert in the art of using a lot of words to say very little. In short, Gardner is everything that Republicans think they want to project in a future leader…but it’s all theoretical.

The reality is hard to ignore: Cory Gardner is terrible at his job.

Now, before you start to disagree with us here, consider this question: Since Cory Gardner was elected to the U.S. Senate in 2014, what has he done that has worked out well?

Gardner is great at muttering nonsense answers to specific questions, but he falls apart in the face of follow-up queries. When confronted with difficult issues, Gardner turns off the ringer on his phone and crawls under his desk. Gardner pretends to support things he actually opposes depending on the political winds, and if you put him in charge of directing specific policies, you can rest assured that nothing will get accomplished.

If you put Gardner in charge of something as important as healthcare policy, you can’t get him to talk about it unless your goal is vague generalities. If you give Gardner a leadership role on foreign policy matters, he somehow wanders into the office of a murderous lunatic (seriously, this was really awful).

Gardner has made a career out of throwing rocks, targeting everyone from Mark Udall to Barack Obama, and his bomb-throwing persona has taken him to the highest levels of government (and dinner at the White House!). Gardner is great at telling people what is wrong with the United States. He is a maestro of partisan politics who excels at complaining about Democrats, and he doesn’t even pretend to be interested in what anyone else has to say. Unfortunately, Gardner doesn’t have a second act. He throws rocks. That’s it.

It is a function of both time and circumstance that nobody can be a “rising star” indefinitely. Gardner is what he is, and he has been this way for a long time. Take a look at something we wrote about this “rising star”  back in March 2013 — a full year before he made a surprise jump into the 2014 U.S. Senate race:

The problem for Gardner is that the “rising star” label can quickly be lost when it looks like you are more sheep than shepherd. He regurgitates nonsense conservative talking points that make no sense considering his own record, and the more you do that, the more you turn into someone like listless Colorado Springs Republican Rep. Doug Lamborn. To be considered a “rising star,” you need to be seen as a “leader” (not a Lamborn). Gardner is quite clearly failing on that front, and he should be careful to prevent that label from becoming permanent. 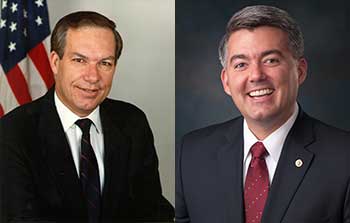 We wrote this paragraph four years ago, and it holds up just as well today. The only thing that has changed for Gardner is the title on his door; otherwise, he’s the same guy.

Gardner is a former staffer for two-term Republican Sen. Wayne Allard, the man who was succeeded by Sen. Mark Udall (whom Gardner defeated in 2014). Gardner is certainly louder than Allard — in part because today’s media landscape provides so many more opportunities to be seen and heard — but functionally, he isn’t all that different than Allard as a Senator. Gardner may have better name ID than Allard, sure, but we don’t recall that Allard was ever as disliked as Gardner is today (the polling speaks for itself).

Before Donald Trump was elected President in 2016, Gardner was being mentioned in some circles as a potential candidate to run for the White House in 2020. This always seemed premature to us, but that’s what often happens when you get labeled a “rising star” in politics — you can be an up-and-comer until you prove otherwise. That’s exactly where we are with Gardner.

Three years from now, Gardner will be facing a dogfight in his bid for re-election to the Senate. If he somehow manages to pull out a victory in 2020, he’ll match his former boss, Allard, as a two-term Republican Senator in Colorado. Winning two terms in the U.S. Senate is certainly no small accomplishment, and Gardner deserves plenty of credit if he can make it that far, but the Yuma Republican no longer looks like someone who is more than a one-hit wonder.