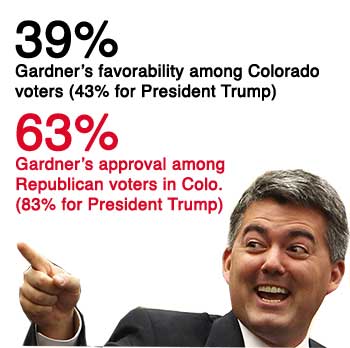 The Denver Post reports today on new polling numbers from Keating Research showing that 54% of Colorado voters would rather save or improve Obamacare instead of eliminating or replacing the healthcare law — numbers that have been fairly consistent among Coloradans. But the more eye-popping numbers come in response to questions about the favorability of Sen. Cory Gardner (R-Yuma):

…the 503 Colorado voters surveyed in the new poll were less than happy with President Donald Trump: 43 percent viewed him favorably, compared to 55 percent who do not like the new commander-in-chief.

It’s a different story for U.S. Sen. Cory Gardner, a Republican who jettisoned his support for Trump last year and has spent much of 2017 trying to walk a fine line with the new administration on policies ranging from Russia to healthcare — all the while taking heat from Democrats and liberal activists for other issues, such as supporting Trump’s Cabinet picks.

The poll found a near-split on his approval ratings: 39 percent viewed Gardner favorably compared to the 38 percent who viewed him unfavorably.

But Gardner’s efforts to keep Trump at arm’s length may be hurting his support among Republicans. His approval among GOP voters was 63 percent — a far cry from the 83 percent of Colorado Republicans who approved of Trump.

These are absolute horrid numbers for Gardner…and they are also easily explainable. As we’ve said in this space many times, the cardinal sin for any politician is to ignore your constituents, which Gardner has done regularly since the 2016 election. It doesn’t help Gardner that he tries so hard to be all things to all people, but the bigger albatross is his very public decision to avoid having contact with Colorado voters (despite what he has said himself in the past).

When a cardboard cutout is more popular than the man himself, you’ve got problems.