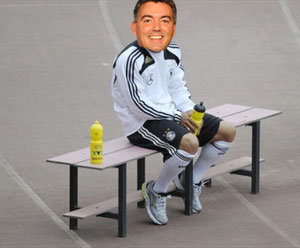 Cory Gardner IS the GOP bench, whatever it is.

Colorado Republican Rep. Cory Gardner is often mentioned as one of the GOP's "rising stars," though he doesn't have much company. Gardner is automatically named as a potential candidate for U.S. Senate or Governor in any story looking at the 2014 election; it's not because he is really looking at higher office in 2014, but because he is the list. You'd have an easier time naming 19th century Vice Presidential candidates than coming up with a handful of potential GOP challengers for Colorado's top-ticket races.

Gardner isn't going to run in 2014 for anything but re-election in CD-4, and we certainly don't blame him. But if Republicans are really looking at him as a "rising star" for future office, someone had better convince Cory that he can't just hammer the YES button on every conservative proposal while also trying to sound like he really cares about the future of Medicare, Medicaid, Social Security, etc.

Back in January we had a little fun with Gardner issuing a statement demanding that President Obama offer up…well, here it is:

The State of the Union is President Obama’s chance to come clean and lay out an honest plan for protecting Medicare and Social Security, which is something he failed to do during his first term.

The absurdity of that statement is easy to grasp when you recall that Gardner was a big supporter of the Ryan Budget Plan of 2012 that would have gutted Medicare and Medicaid. When the knives came out for Medicare and the like, Gardner wasn't standing up in front of them — he was holding a knife himself.

As you might have heard, House Republicans narrowly voted today to approve the 2013 version of the "Ryan Plan," which of course would decimate Medicare and Medicaid…

From The Associated Press:

[T]he plan written by Budget Committee Chairman Paul Ryan – which passed on a 221-207 party-line vote – would reduce spending on the Medicaid health care plan for the poor and eliminate "Obamacare" subsidies. It exempts the Pentagon and Social Security beneficiaries from spending cuts but revives a plan to turn Medicare into a voucher-like system for beneficiaries born in 1959 or later.

All four Republicans in Colorado's delegation voted in favor of the plan, including…YES, Cory Gardner!

But that's not all.

On Wednesday, Gardner also voted in favor of the budget plan put forth by the super-duper conservative Republican Study Committee (RSC). In an attempt to balance the federal budget in just four years, the RSC budget proposed raising the Social Security age to 70 and cutting Medicare even for people who are now 59 years old. Colorado Republican Reps. Mike Coffman and Scott Tipton opposed the RSC budget. Even House Speaker John Boehner wanted no part of this one.

We understand what Gardner is doing…to a degree. He's not ready to make a jump for higher office, and he'll easily win re-election against any Democrat because of the voter makeup of his district. Right now his biggest potential threat is a primary challenge from the far right, which he is trying to avoid by sounding super-conservative and going out of his way to comment on budget issues when he should really just stay quiet.

The problem for Gardner is that the "rising star" label can quickly be lost when it looks like you are more sheep than shepherd. He regurgitates nonsense conservative talking points that make no sense considering his own record, and the more you do that, the more you turn into someone like listless Colorado Springs Republican Rep. Doug Lamborn. To be considered a "rising star," you need to be seen as a "leader" (not a Lamborn). Gardner is quite clearly failing on that front, and he should be careful to prevent that label from becoming permanent.