UPDATE #4 (Friday, 11:15 am): Outside of the Denver City Jail this morning, supporters wait for news on the status of protestors arrested at Sen. Gardner’s office: 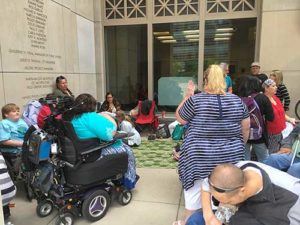 UPDATE #3: Denver PD now disputing Gardner’s contention that he did not order the protesters’ arrest:

Breaking: @DenverPolice tell me these arrests were acting on a signed complaint from a Rep of @SenCoryGardner‘s office. pic.twitter.com/R8PRlc3MK8

Yeah, that’s a problem. From the Denver Post’s story:

Gardner staffers said building management told them on Thursday that the other tenants had begun to complain and that the protesters no longer could remain there.

And Gardner’s statement, which appeared to put the blame on DPD:

“The top priority throughout this protest has been allowing these individuals to exercise their First Amendment rights in a safe environment,” Gardner spokesman Alex Siciliano said. “At the request of the building, [Pols emphasis] Denver police were forced to remove them earlier this evening due to several factors, including serious concerns for their health and safety.”

About a dozen protesters — many with disabilities — were arrested in U.S. Sen. Cory Gardner’s Denver office on Thursday, two days after they began a sit-in to demand that the Republican senator pledge to oppose the GOP’s plan to repeal and replace Obamacare.

“Rather go to jail than to die without Medicaid!” protesters, some in wheelchairs or lying on the floor, chanted while Denver police stood in the doorway of Gardner’s office and ordered them to leave. The demonstrators then live-streamed their own arrests on Facebook while the chanting continued. Police also used video cameras to record the arrests.

“Stop fighting!” a police officer told one of the demonstrators as officers moved in.

“We’re not fighting,” one of the demonstrators responded as an officer cuffed a fellow demonstrator and began carrying him away. Police picked up some protesters, cuffed them and forced them into their wheelchairs and then wheeled them out of Gardner’s office.

“You’re under arrest,” an officer said.

UPDATE: As of 7:30PM, Denver Police have arrested most of the protesters in Gardner’s office.

Stand by for updates. 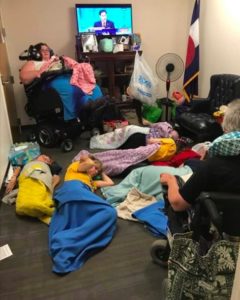 The group is staging a protest over Senate Republicans’ proposed cuts to Medicaid in their health care bill, the Better Care Reconciliation Act. The group of nine has now spent two nights sleeping in the 15-by-12-foot room, bringing in inflatable pool toys on Wednesday night after many slept in their wheelchairs or on the hardwood floor the first night. (Four of the protesters use wheelchairs. Two others have cerebral palsy.)

“It’s been really hot and cramped in here, but we’re not leaving until we get a commitment that Sen. Gardner will vote ‘no,’” said Carrie Ann Lucas, 44, an attorney with the state of Colorado.

Gardner’s aides have not asked the protesters to leave, and one of the aides stayed with the group for much of last night, according to the Denver Post. However, Lucas said they’d repeatedly asked for — and been denied — an opportunity to meet with Gardner in exchange for ending the protest.

“We rely on community-based services to live. I use a ventilator 24/7, and so I need help cleaning the device and taking my respiratory medications,” she said. “Gardner needs to know that these cuts are unacceptable.”

The occupation by ADAPT Denver of Sen. Gardner’s Denver office isn’t the only such action taking place right now, but it’s been one of the most successful in terms of gaining media coverage–as well as successfully occupying their objective for going on three days now without being arrested. That appears to be the result of Gardner making the deliberate choice to not have them arrested, clearly hoping to wait out the protesters rather than guarantee himself the bad press of police dragging protesters with disabilities out of his office.

Everything we know about these particular activists suggests that Gardner doesn’t know who he’s dealing with. ADAPT is a fixture in local grassroots activism, very knowledgeable of their rights and responsibilities as civilly disobedient protesters, and are fully prepared to camp out in Gardner’s office for as long as it takes. There is a group of supporters holding vigil outside on a continuous basis, running supplies and other assistance upstairs as needed.

So whatever Gardner does to resolve this, he shouldn’t hold his breath.