Colorado Sen. Cory Gardner (R-Yuma) said on Monday that he “absolutely supports” a Senate investigation into claims from a Boulder woman who has levied sexual misconduct charges at Supreme Court nominee Brett Kavanaugh.

But that was Monday. Today Gardner appeared at a press conference with Senate Republican leadership in which Senate Majority Leader Mitch McConnell essentially promised to ram through Kavanaugh’s SCOTUS confirmation regardless of any claims of sexual misconduct or assault. 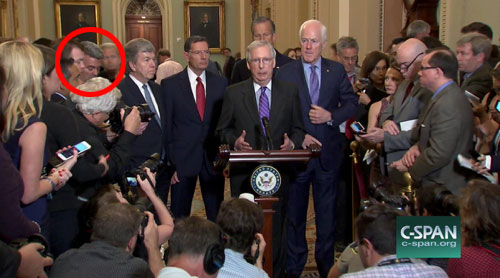 “I believe he’ll be confirmed, yes,” McConnell said at a press conference at the Capitol,  when asked if he had the votes.

Earlier in the press availability, McConnell said he was “confident we’re going to win.”

Okay…but what about that not-so-insignificant matter of Thursday’s planned testimony from Christine Blasey Ford, who has accused Kavanaugh of sexual assault when they were in high school together? Back to TPM we go:

Asked if his language made it seem like he would not approach Blasey Ford’s testimony seriously, McConnell noted that few people were willing to testify under oath about the matter.

Regardless, all signs point to Republicans moving quickly after the hearing, to confirm Kavanaugh as quickly as next week.

“It is our plan to move forward in the very near future,” McConnell said.

If you’re wondering how McConnell, Gardner and pals could possibly just plow ahead with Kavanaugh’s confirmation at this point in time…well, you’re certainly not alone.

President Trump and other Republicans across the country are inflicting very real political damage on themselves with their awful comments about Kavanaugh’s accusers, and actions like today’s press conference telegraph the fact that Senate Republican leaders don’t actually care about what any of these alleged victims are saying.