On December 4, 2020, Colorado Pols was the first to note that Congressperson Lauren “Q*Bert” Boebert had filed a campaign finance report that included a completely implausible amount of money returned back to her pockets for “mileage reimbursements.” As we wrote at the time, Boebert’s campaign reimbursed the candidate $22,259 for mileage, which would mean that Boebert claimed to have driven far enough in 8 months to have circumnavigated the globe 1.5 times.

It took a few months, but The Denver Post eventually reported on the story in February 2021, and the details subsequently made national headlines. Despite official complaints being made, Boebert’s mileage scandal (and her continued use of her campaign account as her own personal ATM) kind of petered out…

Colorado officials are examining allegations that Representative Lauren Boebert, a Republican representing the state’s western half, inflated the mileage she logged on the campaign trail in 2020 and then used more than $20,000 in reimbursements from donors to pay off years of tax liens on her restaurant.

The allegations have bounced around liberal circles since The Denver Post first reported in February 2021 that Ms. Boebert had cashed two checks from her campaign totaling $22,259 for mileage reimbursement, a figure that equated to 38,712 miles — well more than 24,901-mile circumference of the planet. [Pols Note: The Denver Post did in fact credit Colorado Pols for first catching this story]

But the same group that unleashed a torrent of unflattering information about Representative Madison Cawthorn that helped defeat his bid for a second term in North Carolina last month has brought the matter to the Colorado attorney general’s office, which has referred it for an interagency examination. [Pols emphasis]

Janet Drake, the deputy Colorado attorney general for criminal justice, told David B. Wheeler, one of the founders of the American Muckrakers PAC, on Tuesday that her department would work with the state’s Department of Revenue and Department of Labor and Employment “to investigate the issue.” 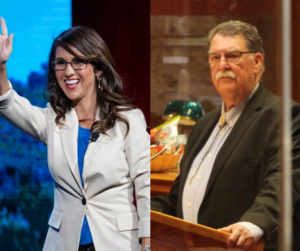 Boebert’s campaign has since amended that original campaign finance report to claim that reimbursements were also for hotel and lodging expenses, which is nevertheless still against FEC rules for documenting reimbursements. As the Times reports, a spokesperson for Boebert’s campaign claims that Boebert had already paid off $20,000 in tax liens for her Shooter’s Grill restaurant before she received the $22,259 reimbursement check from the campaign. Boebert’s camp would have you believe that it was just a weird coincidence that she was reimbursed from her campaign an amount of money that would cover her outstanding tax debts.

The group called American Muckrakers PAC helped take down Boebert’s buddy Madison Cawthorn in a Republican Primary in North Carolina in May. That group said afterward that it was focusing its efforts on ousting Boebert in Colorado’s June 28th Republican Primary. As the Times reports, American Muckrakers recently pushed for Boebert’s mileage scandal to get a new look from investigators:

“As you are both fully aware, utilizing an illegal source of funds or ill-gotten funds to pay off a tax lien is illegal in Colorado and under federal law,” the Muckrakers complaint to the attorney general stated, adding, “That is the very definition of ill-gotten funds.”

David Wheeler, one of founders of American Muckrakers PAC, had the final word in the Times story:

“This is not an attack on Lauren Boebert,” Mr. Wheeler insisted. “Had Representative Boebert paid her restaurant staff properly and also paid the unemployment premiums to the State of Colorado, an investigation never would have been necessary.”

Will this be enough to help Republican challenger Don Coram defeat Boebert on June 28th? Probably not by itself, but an escalation of this scandal certainly won’t help Q*Bert’s re-election hopes.

And remember, once again: You heard it here first.