Congresswoman-elect Lauren “Q*Bert” Boebert didn’t even wait until she was sworn-in to office to start her own political grifting operation.

We were perusing the latest campaign finance reports this morning and came across a whopper of an expenditure: A few weeks ago, Boebert wrote herself a check from her campaign account in the amount of $21,199.52 for “mileage reimbursement.”

In fact, Boebert’s campaign finance reports indicate that the candidate was “reimbursed” for a total of $30,177 in 2020. For comparison’s sake, we looked back at reimbursements to outgoing Rep. Scott Tipton — who Boebert defeated in the June 2020 Primary. Over the last 10 years, Tipton was reimbursed from his campaign account for a grand total of $12,255 (see chart after the jump below).

Let’s go back to just talking about mileage. The current mileage reimbursement rate dictated by the IRS is $0.575 cents per mile, which means that Boebert is claiming to have driven roughly 36,868 miles since April 2020. To put this in perspective, consider that a full-time semi truck driver clocks about 45,000 miles per year; at Boebert’s claimed mileage rate, she would have driven 55,302 miles in 2020. Truck drivers who do nothing else but drive for 8-10 hours a day would have a hard time matching this number. 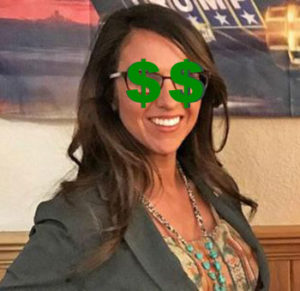 Colorado’s Third Congressional District is a huge area geographically, but that still doesn’t explain such a huge driving expense — particularly when the price of gas is lower than it has been in years. Boebert is saying that she put enough miles on her car — again, just since April — to drive from her home in Rifle to Denver more than 200 times.

To put it another way, Boebert claims she drove far enough in 8 months to have circumnavigated the globe 1.5 times.

Campaign accounts are not slush funds for candidates. This is not the kind of thing that just gets swept under the rug, as former Congressman Duncan Hunter can attest. Unless Boebert can somehow document her exorbitant mileage claims, this would appear to be a pretty cut and dried case of misusing campaign funds.

And Boebert is still a month away from being officially sworn-in as a Member of Congress.

Reimbursements to outgoing Rep. Scott Tipton (R-Cortez) over the course of the last decade: 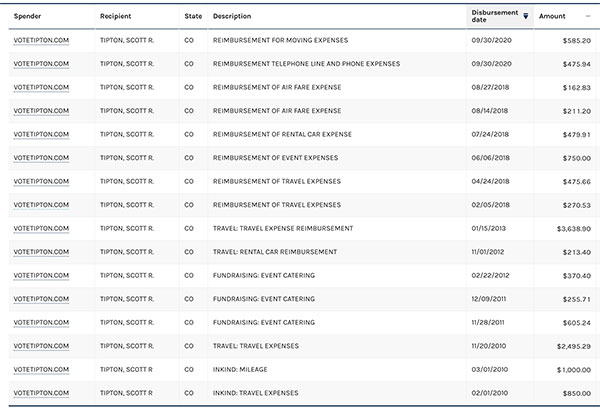