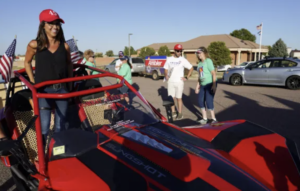 We’ve been discussing in this space recently a story about Rep. Lauren “Q*Bert” Boebert and a rather questionable mileage reimbursement check she wrote herself from her campaign account back in November. According to Justin Wingerter of The Denver Post, this questionable reimbursement has now officially led to a Congressional ethics complaint.

From “The Spot” newsletter:

“Rep. Boebert’s curious campaign travel expenses warrant an immediate investigation by the (OCE),” wrote Kyle Herrig, the group’s president. “She has refused to provide exculpatory evidence to the public, so it is critical she is held to account for this potential abuse of campaign funds.”

The complaint cites a Denver Post article published Tuesday, which analyzed the reimbursements. Boebert’s campaign did not respond to a request for comment about the ethics complaint Thursday. [Pols emphasis]

Boebert addressed the matter publicly for the first time Wednesday. On Twitter, she wrote that she drove often across a massive district during last year’s campaign, as the Post article notes. “Glad the media wrote a story about the hard work I put into my campaign,” she added.

If you’re unfamiliar with the story, first reported here at Colorado Pols in December and recently updated by The Denver Post (and many, many others), Boebert reimbursed herself more than $22,000 for “mileage” in 2020…which is a pretty absurd figure for anyone to claim. Boebert is basically saying that she drove nearly 37,000 miles between April and November 2020, which would be enough to circle the earth one-and-a-half times. Driving 37,000 miles in a matter of months would also be enough to qualify Boebert for the Guinness World Record for “Longest Journey By a Car In a Single Country.”

In other words: Nope.

Boebert has not offered any explanation for her self-generosity, other than to say that such a ridiculous amount of driving was because of all the “hard work I put into my campaign.” Earlier today, Boebert also tossed out a stilted whataboutism response mentioning a Democratic colleague in Congress.

We’re guessing the Office of Congressional Ethics is going to want a little more detail on these “reimbursements” than what Boebert has spun up thus far. We’re also going to guess that Boebert does NOT have a shoebox full of receipts stashed away somewhere.