Federal officials are pressing Rep. Lauren Boebert, R-Colo., for answers on the apparent personal use of thousands of dollars in campaign funds.

A letter from the Federal Election Commission to the treasurer of Boebert’s 2022 reelection campaign inquired about four Venmo payments totaling over $6,000.

FEC filings show the payments came between May and June for what’s described on the forms as “personal expense of Lauren Boebert billed to campaign account in error.” The filings then note that the “expense has been reimbursed.” 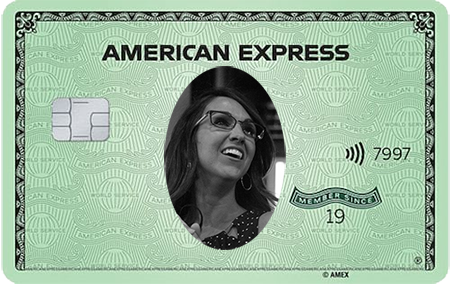 As readers know, freshman GOP Rep. Lauren Boebert stepped into scandal early this year after huge personal “reimbursements” totaling over $22,000 from her campaign account we first wrote about the previous December, allegedly for miles driven during Boebert’s 2020 campaign for Congress–an amount that dwarfed the expenses reimbursed to Boebert’s predecessor Rep. Scott Tipton in his decade of campaigning, and was found in several investigations to have been arithmetically improbable at best. Additional questions were raised after it came out that Boebert had paid off just under $20,000 in state tax liens on the Shooters’ Grill just a couple of weeks before she received the mileage check last November.

The Federal Election Commission sent a letter to Boebert’s campaign yesterday–and in addition to pointing out a number of excessive donations that needed refunding from Boebert’s latest quarterly report, there’s still more concern about personal use of campaign funds:

Personal use is any use of funds in a campaign account of a present or former candidate to fulfill a commitment, obligation or expense of any person that would exist irrespective of the candidate’s campaign or duties as a federal office holder. Schedule B of your report discloses a disbursement that appears to possibly constitute personal use of campaign funds by the candidate (see attached), as defined at 11 CFR § 113.1(g).

Finally, if it is determined that the disbursement(s) constitutes the personal use of campaign funds, the Commission may consider taking further legal action. However, prompt action to obtain reimbursement of the funds in question will be taken into consideration.

Here are the reimbursements that caught the FEC’s attention: 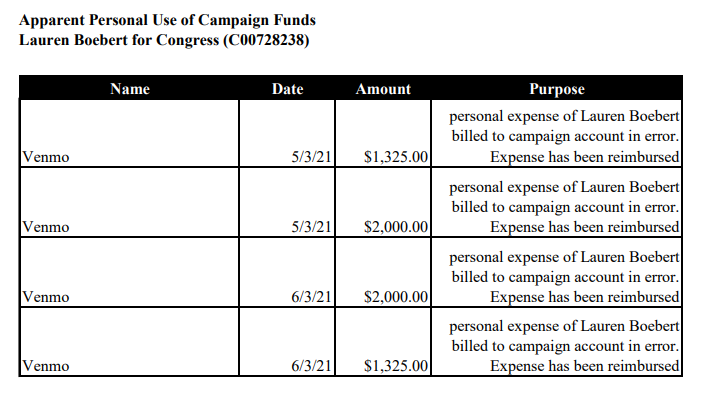 So folks, these are pretty sizable personal expenses “billed to the campaign account in error,” and they appear from the amounts involved to be recurring expenses. The FEC says that “promptly” reimbursing the funds in question, which Boebert’s campaign claims was done at some unspecified time after the expenses were incurred, “will be taken into consideration.” But even if reimbursed, a pattern of such expenses billed and reimbursed “in error” could still constitute an improper use of campaign accounts to obtain what amount to interest-free short-term loans.

You can only make the same “mistake” so many times before it becomes something other than a mistake.