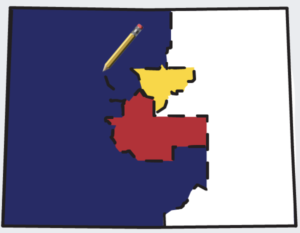 If you can’t beat ‘em, cheat ‘em! This is the Republican motto for the 2022 election, born out of “The Big Lie” that all good little Republican boys and girls are expected to endorse in order to avoid the wrath of Donald Trump and get around having to admit that the GOP lost both the White House and the U.S. Senate in 2020.

Confronting your failures and assessing your shortcomings is an uncomfortable undertaking. Expanding your outreach to appeal to a broader swath of voters is difficult work. Adjusting policy positions to appeal to said voters requires engaging in arduous conversations. Preventing far-right candidates from winning Republican Primary Elections, and becoming liabilities in a General Election, demands a lot of organizing and planning.

Republicans could reject Trumpism and try to understand what Americans actually want, but they seem to have come to the conclusion that it is easier and more comfortable to change the rules than to alter the way they play the game.

“There is a very real probability that 2018 will be known as the election when it became apparent that the Republican Party no longer has the voter registration numbers to be competitive in Colorado.”

This is why Republicans are instead focused on trying to make it harder for people to vote in 2022. It’s working in states like Georgia and Texas, but not in Colorado. So the next step in our state is for the GOP to construct a different boogeyman: Gerrymandering.

Gerrymandering is a very real and very legitimate issue in American politics. As The New York Times examined in 2019, gerrymandering is particularly egregious in some pockets of the United States:

Currently, rigged maps tend to be most prevalent, and most tilted, in states under Republican control. That is in part because Republicans did exceptionally well in the 2010 elections, giving the party far wider control of state legislatures, which oversaw redistricting after the 2010 census. The national Republican Party had poured money and expertise into state legislative races with the specific aim of gaining control over redistricting; the Democratic Party had not.

Many political scientists consider the House maps in Republican-controlled states like North Carolina, Michigan, Ohio and Texas to have the most pronounced partisan slants. (Pennsylvania was also on the list until its map was redrawn last year.) Among Democratic-held states, Maryland, Illinois and — to some observers — California are regarded as the most tilted. Illinois is especially notable for its “pizza slice” division of metropolitan Chicago, using generous helpings of urban Democrats to offset the heavily Republican suburbs in district after district.

In Colorado, gerrymandering has not been nearly as big of a problem…unless you listen to a small but loud cadre of Republicans who are desperately trying to build a false narrative to convince members of Colorado’s Independent Redistricting Commissions that new district lines must be particularly helpful for the GOP in order to make up for the fact that they can no longer figure out how to win elections.

The Gerrymandering That Wasn’t

Republicans are pushing a “gerrymandering” narrative that uses many of the same recycled talking points that they trotted out in 2001 and 2017. This 2017 editorial from former GOP Secretary of State Scott Gessler accuses Democrats of having gerrymandered districts in Colorado for several decades.

Now take a look at what Republican State Rep. Colin Larson wrote in a May 2021 Op-Ed published in The Denver Post (if you clicked on the link above for Gessler’s column, it may have spoiled the ending):

…the 2011 commission was a complete failure and gave Colorado one of the worst gerrymandered maps in the nation.

This is simply not true. Numerous academic studies have examined gerrymandering in America since the 2010 Census. We have yet to find a reputable study that includes Colorado on the list of “worst gerrymandered maps in the nation,” and it’s not for lack of trying (see HERE, HERE, and HERE for but a few examples). One of the more recent of these studies, from the University of Southern California, determined the following Top 10 worst state legislative partisan gerrymanders:

Nevertheless, Larson slogs along trying to make an argument to support his gerrymandering fearmongering. Let’s consider some of those attempts:

Between 2012, when districts were last drawn, and 2016, only three of Colorado’s 65 House seats experienced a change in political party representation. Three out of Sixty-Five!

We are currently in the year 2021 (we double-checked). There were five statewide election cycles in the last decade, but Larson curiously only mentions three of them (2012, 2014, and 2016). Larson doesn’t bring up 2018 and 2020, because those outcomes don’t reinforce his made-up narrative. The reality is that eight (8) State House Districts — 12% of all districts — switched party control at least once between 2012 and 2020.

“It is the job of the state party to get candidates elected. I don’t think they’ve been doing it.”

Larson also doesn’t mention that in 2014 alone, three (3) House District races (HD-3, HD-31, and HD-36) were decided by margins of between 221 and 668 votes. If just a few hundred votes from two of these races went the other way, Republicans would have won control of the State House in 2014.

With just these examples, we can point to at least 11 House Districts that were reasonable swing districts in the last decade. Winning a majority in the State House requires holding 33 out of 65 seats; this is more than doable with 11 swing seats. In the last decade, an average of nearly 8 State House seats per cycle were decided by margins smaller than 10%.

(Shhh…Don’t Talk About the State Senate)

Just this week, Larson said this to Ross Kaminsky on KHOW radio:

The current maps are so heavily gerrymandered, particularly in the legislative level, to favor Democrats consistently. Every election, Republicans get about six to eight percent fewer seats in the state legislature than the overall state vote that Republican candidates get for those positions.

If Larson had some actual facts here, he might have a decent talking point, but this is gibberish. Larson’s “gerrymandering” fairy tale is easier to swallow if you ignore — as he does — the State Senate in Colorado. 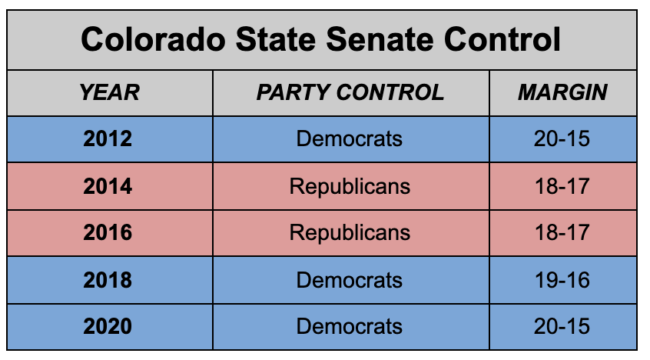 These outcomes represent what Larson calls “the failure of 2011” (when maps were last re-drawn). The biggest changes came in 2018 and 2020, when two massive blue waves swept over Colorado, in large part as a repudiation of former President Trump. But taken as a whole, you can’t argue with a straight face that Democrats dominated control of the state legislature in the ‘10s.

Even from a statewide perspective, Colorado has been a fairly competitive state until the last two cycles. Take a look at how each party was represented in the six major statewide offices in Colorado over the last decade:

Gerrymandering didn’t suddenly “activate” in the latter part of the decade. The reason control shifted so much toward Democrats in recent years is because of a combination of strategic political decisions that have nothing to do with the existing district lines.

Why Republicans Are ACTUALLY Losing

“Regardless of who we elect [as GOP Chair] and regardless of how good a job they do getting Republicans out to vote, it really doesn’t make a difference if we have a candidate who offends those unaffiliated voters.”

The 2020 election was the culmination of a downward trend for Colorado Republicans that started in 2010 but really got bad after the 2014 cycle. Republicans advocated policies that a majority of Coloradans didn’t agree with — failing over and over and over on ballot measures restricting abortion, for example — and focusing their attention on silly social gripes. In consecutive cycles, they recruited bad candidates and ran awful campaigns managed by inept strategists.

AND REPUBLICANS WILL TELL YOU THIS THEMSELVES. There are lots of variations of this story [“What happened to the Colorado Republican Party?”, Denver Post, 12/20/20] over the years, in which Republicans openly admit to reporters that their leaders and advisers were both incompetent and corrupt. This paragraph from The Denver Post sums up the various factors hurting Republicans in Colorado:

The Denver Post examined data and spoke to more than 20 Republicans, including many current and former elected officials, and found most attribute the powerlessness of a party that was competitive here just a few years ago, and dominant as recently as 2002, to a mix of factors: allegedly mismanaged campaign money; fundamental disagreements within the party over its direction and message; the increasing strength of the Democratic Party; demographic shifts that contributed heavily to the GOP’s disadvantage in voter registration; and the unpopularity of President Donald Trump, whom one pollster referred to as a “rocket booster” for Colorado Democrats.

The GOP kicked off what would become a rough decade in 2010 with a ludicrous attempt at winning the open seat for Governor. Republicans picked Dan Maes, a U.N. conspiracy-touting weirdo, as their nominee for the top job in the state. Former Republican Congressman Tom Tancredo ended up running as the nominee of the American Constitution Party, and Maes finished a distant third in the race with just 11% of the total vote. Had Maes finished with less than 10% of the vote, the Republican Party would have been demoted to “minor party status” in Colorado. When you consider that this is where the Colorado GOP started the previous decade, it’s a friggin’ miracle that they were able to win anything else in the following years.

Meanwhile, House Republicans promptly handed over strategy and fundraising to House Minority Leader Patrick Neville, both of which disappeared into the black hole that was brother Joe Neville’s political consulting firm. By the time Pat Neville finally “got resigned” from his leadership role, Democrats had cemented consecutive 41-24 seat majorities in the State House. Democrat Jared Polis pummeled the ridiculous Walker Stapleton by 11 points to become Governor in 2018. In 2020, Democrat John Hickenlooper defeated Gardner by 9 points while Democrat Joe Biden cruised to a 13-point margin over Trump.

None of this had anything to do with “gerrymandering.”

Republicans are trying to change the way Americans vote because they can’t figure out how to change American minds. In Colorado, the GOP is trying to create a false narrative about “gerrymandering” for a similar reason; they want to convince the Colorado Independent Redistricting Commission to draw more favorable Republican districts that can help overcome their own ineptitude.

The job before the Redistricting Commissioners is straightforward: To create fair and balanced district maps for the next decade. It is not the Commission’s responsibility to help Republicans figure out how to win elections in Colorado.