Kicking off our recap of the year’s biggest stories in Colorado politics is, naturally, the unlikeliest Republican nominee in the state’s history, Dan Maes. Of course, Maes’ discovery of the “horrible truth” could describe a number of events on the long campaign trail: that journalists actually check out the fictitious bios posted on one’s website, that campaigning involves more than filling your gas tank, and (related to the previous) there are limits on what you can reasonably reimburse yourself for–you should not expect campaign contributions to supply you with a personal income in excess of what you were making before you ran. That looks kind of, well, bad.

But on the way to Maes’ 11% slaughter in the general election, he did manage to perform one very important public service–his prescient warning that the Denver B-Cycle bike sharing program is, in fact, a “very well-disguised” strategy by the United Nations to assault American freedom. TPM reported in early August:

…Maes, a Tea Party friendly candidate facing former Rep. Scott McInnis in the August 10 Republican primary, has come out against a public bicycle program run by the city of Denver. Denver’s mayor, John Hickenlooper, is the presumptive Democratic nominee, and a cycling supporter.

“This is all very well-disguised, but it will be exposed,” Maes said at a small campaign rally last week, according to the Post. “These aren’t just warm, fuzzy ideas from the mayor. These are very specific strategies that are dictated to us by this United Nations program that mayors have signed on to.” 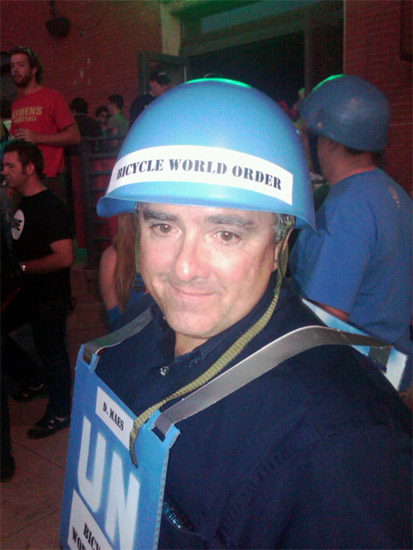 Well, folks, if there’s one thing you need to know about the at-large citizenry of Denver, Colorado, it’s this: they don’t take subversive plots by world government supervillains lying down. Just a couple of weeks after Maes won the GOP primary over scandal-plagued candidate Scott McInnis, the Denver Cruisers spontaneously organized a bicycle-borne mock invasion of the streets of downtown Denver by hundreds of blue-helmeted stormtroopers–like the scary fellow at right. 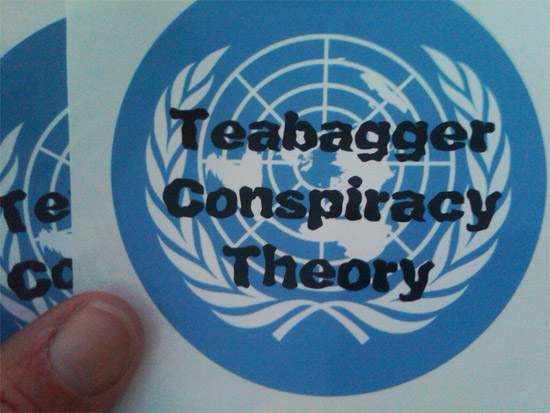 On the other hand, there were some indications (left) that the Denver Cruisers were merely having some fun at Mr. Maes’ expense, and really weren’t taking Maes’ warnings of imminent capitulation to the U.N.’s evil agenda, you know, seriously.

So we, like everyone else, are left to ask the question: was it the warning about the “U.N. bicycle plot” that pushed Maes out of the realm of viable candidates, and into joke territory? Probably not–much of the exposure of Maes as a clueless, two-bit fraud, running for Governor more or less because he couldn’t hold down a regular job, had already happened by this time.

But it was a great moment to stop and revel in the absurdity to which this election had descended.