Get More Smarter on Wednesday (January 6)

Welcome to the first “Get More Smarter” of 2021! If you think we missed something important, please include the link in the comments below (here’s a good example). If you are more of an audio learner, check out The Get More Smarter Podcast. And don’t forget to find us on Facebook and Twitter.

Democrats are close to capturing majority control of the U.S. Senate after Raphael Warnock defeated Republican Kelly Loeffler in Georgia’s runoff election on Tuesday; Warnock becomes the first Black Senator from the State of Georgia.

In the other Senate contest, Democrat Jon Ossoff holds a narrow lead over Republican David Perdue, with the majority of the outstanding ballots still to be counted concentrated in Democratic-leaning counties. As National Public Radio reports, Ossoff has declared victory:

Democrat Jon Ossoff — who as of 9 a.m. ET Wednesday leads Republican David Perdue by about 16,000 votes in the Georgia runoff that could give Democrats control of the U.S. Senate — claimed victory Wednesday. The Associated Press, which NPR relies on for its results, has not yet called the contest.

“It is with humility that I thank the people of Georgia for electing me to serve you in the United States Senate,” Ossoff said in remarks Wednesday morning.

When Vice President Kamala Harris is sworn-in to office on January 20, she will become the tie-breaking vote in the Senate that will change Mitch McConnell’s title to “Minority Leader.” 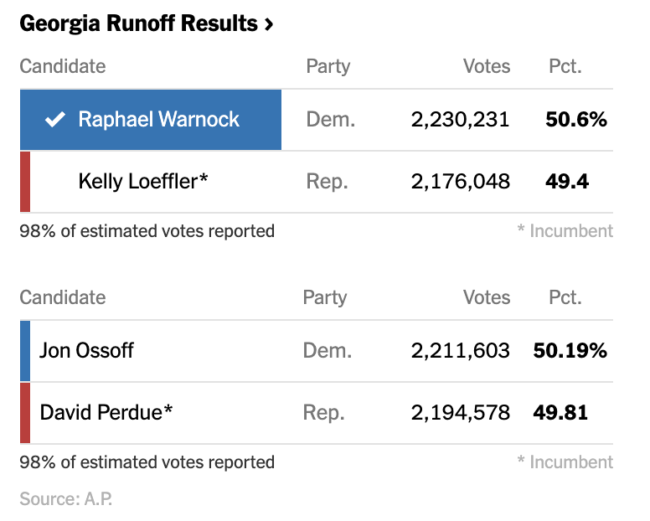 ► With a new Democratic majority in the U.S. Senate, expanded coronavirus stimulus payments could be just around the corner.

…the bicameral session of the House and Senate — which could stretch into the early hours of Thursday — will be the stage for this last stand by Trump allies who have refused to accept the election results.

Inside the Capitol, the effort has splintered Trump’s party, with more than 100 House Republicans and at least a dozen Senate Republicans objecting to Biden’s victory while Senate GOP leadership warned their caucus against the effort. Already, senators are signaling they’ll challenge results in Arizona, Georgia and Pennsylvania.

But the most intense focus will be on Vice President Mike Pence, who will preside over the 1 p.m. joint meeting, where he’ll be required by the Constitution to count the electoral votes certified by the states. Biden earned 306 electoral votes to Trump’s 232, and a wave of legal challenges by Trump to reverse several states’ results failed at every level of state and federal court.

Are you familiar with the phrase, “it’s all over but the shouting”?

Congressman Joe Neguse (D-Boulderish) will play a key role in today’s nonsense-fest as one of four Democrats assigned to handle the arguments against overturning the election results.

Here in Colorado, local Republicans are promoting a QAnon rally in Denver aimed at showing support for President Trump, or something.

► POLITICO reports on an absolutely amazing bit of karmic justice:

Joe Biden has selected Judge Merrick Garland to serve as his attorney general, according to two people with knowledge of the decision.

In 2016, President Barack Obama nominated Garland to serve on the Supreme Court, but his nomination languished in the GOP-controlled Senate at the end of the former president’s term. In recent weeks, Garland has been recusing himself from cases involving the federal government, fueling speculation that he was a leading candidate for the job.

► Congressman Ken Buck (R-Greeley) will NOT be objecting to the 2020 election results today. As Buck wrote in an Op-Ed published by The Washington Post:

I share the concerns of many voters across the country about irregularities in the presidential election. I also share their disappointment with President Trump’s loss. However, the Founders trusted the states to decide elections, not members of Congress.

The Republican members who plan to reject certain electors read into the Constitution and the Electoral Count Act a provision that simply does not exist. The 12th Amendment is simple and clear: It calls on Congress to perform the ceremonial role of counting electors. There is no allowance for rejecting electors — no matter how much we may disagree with the result or wish the election process had been better.

Perhaps Buck is thinking about his own political future here. As Catie Edmondson of The New York Times reports:

Republican Congressman Ken Buck is mulling challenging Bennet in Colorado in ‘22 after fielding a call from Rick Scott, per a person familiar

And don’t worry — you’re not the only person who finds this amusing:

Flashback: Ken Buck was the candidate who lost to Bennet in the 2010 GOP wave. Republicans blamed him for costing them the seat.

Colorado’s only gotten bluer since then.

If this is Rick Scott’s first recruiting move as NRSC chair… https://t.co/RARJmZNF64

► Attempts to overturn the 2020 election results will almost certainly fail today, but for those thinking of sitting on the sidelines…beware the wrath of Eric Trump!

I will personally work to defeat every single Republican Senator / Congressman who doesn’t stand up against this fraud – they will be primaried in their next election and they will lose.

► Mesa County Clerk and Recorder Tina Peters is a picnic short of a picnic.

On Tuesday afternoon, the state shut down its unemployment benefits systems as it began moving more than 1.5 million claims over to a newer, modernized platform set to launch this weekend.

More secure, easier to use and more efficient than its much-maligned predecessor, state officials say, the new system is expected to be activated on Sunday in time for thousands of people to log on and request payments for the prior week.

CDLE deputy executive director Cher Haavind was optimistic that by working with the state’s technology vendor for the project, Deloitte, and the Governor’s Office of Information Technology, the department would be able to stand up the program successfully this weekend.

► Colorado teachers and other essential workers will receive COVID-19 vaccinations after we vaccinate people older than the age of 70.

► 9News has more on a scary story about an apparent attempt to assassinate Colorado Attorney General Phil Weiser:

A Denver man’s guns were ordered seized last year under Colorado’s red flag law after he plotted to kill state Attorney General Phil Weiser and threatened other public officials, according to court records.

Bryce Shelby, 28, self-identified with the Black Panther Party, expressed the desire to join a nationalist paramilitary organization, and posted violent and threatening posts to social media, according to a petition for an extreme risk protection order.

► Some parents in Douglas County are demanding that schools go back to in-person learning immediately.

► 9News reports on efforts in Denver to curb the homelessness problem.

► Voters in Grand Junction may get to vote in April about allowing legal marijuana businesses to operate within the city.

► Uh, what? We’re assuming that he is talking about someone else taking part in “trail by combat,” since Giuliani could be felled by a stiff wind. 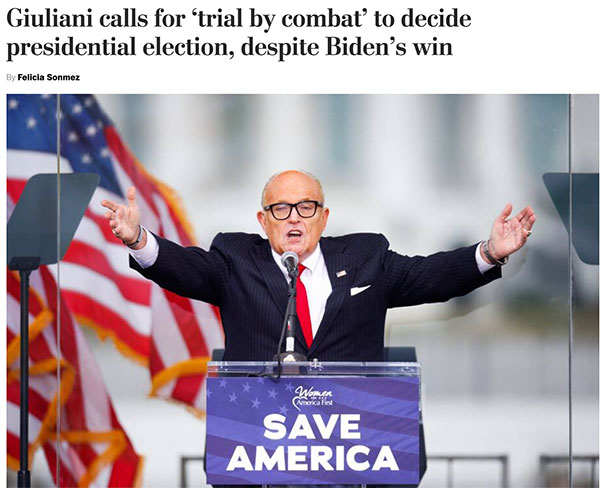 ► Chris Cillizza of CNN breaks down the brief, and disastrous, tenure of Georgia Sen. Kelly Loeffler:

Appointed Republican Sen. Kelly Loeffler’s loss at the hands of Rev. Raphael Warnock (D) on Tuesday brings to an end one of the most ignominious Senate terms in modern memory.

Yes, there have been shorter tenures. (Georgia Democratic Sen. Rebecca Latimer Felton served for only a single day!) And, yes, plenty of other appointed senators have lost when they ran for election in their own right. (Like Arizona’s Martha McSally, who lost in November.) But few — if any — appointed senators have so tarnished their personal reputation as Loeffler did in the year she spent in the world’s greatest deliberative body….

…All in all, Loeffler not only ran a remarkably bad campaign, but she also seemed to abandon the entire reason she was chosen in the first place. A moderate Atlanta businesswoman ran like a Trump conservative — and lost.