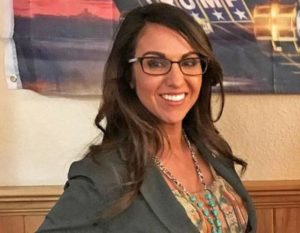 “Brown Shirt” is a term used to describe a member of the Sturmabteilung, Hitler’s Nazi militia that attacked and often killed opponents of Hitler’s rise to power.

“Here in Garfield County where my restaurant is, restaurants are closing once again because Governor Polis has sent his Brown Shirts in to make sure everyone shuts down,” Boebert told KVOR’s Jeff Crank Dec. 26. “It is sad. It is depressing. Business owners cannot pay their employees. They will not be able to pay rent. We’re worried about all of these folks who won’t be able to pay their rent. But what about the actual mortgages? Who’s going to hold the owners of these buildings and help them out? You know, all of this is just a mess and we need to reopen our country for business.”

State Rep. Patrick Neville (R-Castle Rock), who was the Republican House Leader at the time, said last year that Polis’ stay-at-home orders could lead to a “Gestapo-like mentality.” The Gestapo were the Nazi secret police.

Polis tearfully responded to the accusation in April.

“As a Jewish American who lost family in the Holocaust, I’m offended by any comparison to Nazism,” said Polis, as quoted in The Denver Post. “We act to save lives — the exact opposite of the slaughter of 6 million Jews and many gypsies and Catholics and gays and lesbians and Russians and so many others.”

Neville later apologized, telling the Denver Post that he should have said “authoritarian” instead of “Gestapo.”

Under state rules, Garfield County restaurants have faced a range of restrictions at various times during the pandemic, including limitations on indoor seating and mask-wearing requirements.

Other Republicans and GOP groups, in Colorado and elsewhere, have compared COVID health orders to Nazism, without singling out Polis.

“These stimulus checks, Jeff, they are basically Amazon gift cards,” she told Crank. “The Democrats have closed small businesses. So when you’re sending out these checks, we’re just lining [Amazon founder Jeff] Bezos’ pockets up.”

Public health officials have criticized Boebert’s stance against public health orders and her campaign events that did not follow social distancing recommendations.

Last month, Boebert accused Durango, Colorado, Mayor Dean Brookie of wanting to “starve” local restaurants out of business by enforcing COVID health orders. Brookie responded by saying that “people in our community are dying” and that “we don’t need this type of rhetoric in our community.”

Polis himself has been characterized as a Brown Shirt before. In a 2018 Facebook post, the Jefferson County Republican Part suggested the aspiring governor form a club on how to be a “Brown Shirt for fun and profit.”

Efforts to reach Boebert were not successful.